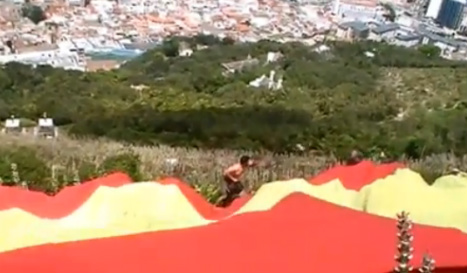 A group of party members had brought the 18 by 11 metre flag to the British Overseas Territory, which has proved a bone of contention between the UK and Spain for decades, and unfurled it near to the summit of the famous Rock of Gibraltar at around 1.30pm local time.

Nacho Mínguez, president of Vox Madrid, was arrested by Gibraltarian police after the incident.

The flag stayed in place for around 20 minutes before being removed by officers in the Royal Police.

“With this act, Vox wanted to state that we will never stop until full Spanish sovereignty of the Rock is reclaimed, the theft of which made it an unacceptable tax haven, damage to our fishermen, economic depression for the Campo de Gibraltar (the area of Spain neighbouring Gibraltar)  as well as making local workers into hostages of that pirate Picardo,” Santiago Abascal, the leader of Vox, said in a statement on Monday; “that pirate Picardo” referring to Gibraltar’s First Minister, Fabian Picardo.

Vox said the arrest of Mínguez was “intolerable” because “unfurling a Spanish flag is not a crime on Spanish soil, as is Gibraltar, nor on European soil”.

The party has demanded his immediate release.

Cameron called off his appearance – and halted all campaigning – after the murder of British Labour MP Jo Cox on Thursday, June 16th.

Spain has said that if the UK were to leave the EU with a vote for Brexit then a joint sovereignty agreement over the territory would be called for.