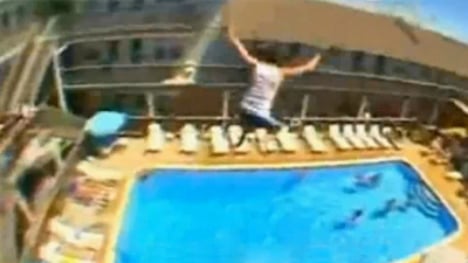 The Foreign and Commonwealth Office (FCO) and the Travel Association (ABTA) have renewed calls to British holidaymakers to use their balconies safely after a spate of accidents left several tourists fighting for their lives in hospital.

In 2015 alone, three British holidaymakers died after falling or jumping from balconies and three more were seriously injured. This presents just a fraction of the total number of incidents, according to a statement released by the ABTA on Thursday.

The dangerous practice known as ‘balconing’ involves climbing from one balcony to another or jumping off a balcony into the swimming pool below.


A British tourist 'balconing' in Spain.

The FCO has been distributing posters and leaflets to popular tourist hotels in Spain warning young people of the dangers of jumping off balconies as part of the campaign – now in its fifth year.

Many cases of balcony jumps and falls come about because young people are drunk or high on alcohol and drugs, which can seriously impair their judgement.

A 34-year-old holidaymaker is in a critical condition after jumping from a balcony into a swimming pool last month. He suffered a severe injury to his spinal cord.

Will Middleton, FCO Consular Director for Southern Europe, said: “We have already seen a number of very serious injuries caused by balcony falls this summer. We really do urge people to avoid taking risks around balconies, particularly if you have been drinking. A momentary lapse of judgement can lead to a lifetime of consequences. So think balcony safety, look out for friends and avoid doing anything that might cost a life.”

The FCO and ABTA have put together the following guidelines that tourists should follow while on holiday in Spain: Spanish authorities have also attempted to clampdown on the stupid craze in recent years.

Hoteliers in the Balearic Islands have tried to make it more difficult for people to jump off balconies and in some resorts fines can be issued to those caught attempting to do so.