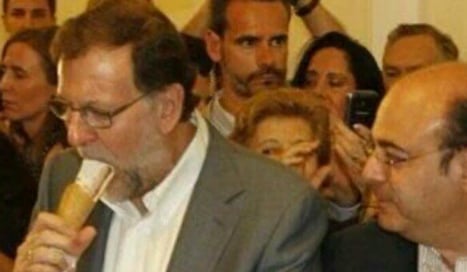 As Spain nears a general election on June 26th, the second in the space of six months, its politicians are grasping for photo ops and, more often than not, failing spectacularly in their attempts to attract new voters.

Instead they have become the butt of a million online jokes.

Be it Mariano Rajoy demonstrating how not to eat an ice-cream or Pedro Sánchez caught on camera wiping his hand after shaking hands with a little boy… Spain’s politicians are really winning in the “awkward” stakes.

He’s not like us, Mariano Rajoy. He’s so above the average joe he has never bothered to learn how to properly eat an ice-cream, as evidenced in a photo taken of him enjoying the summer snack in Granada. Rajoy believes that the best way to eat an ice-cream is to shove it full-force into your mouth – has he never heard of brain freeze?

Poor Pedro Sánchez. Shaking any child’s hand is bound to leave a residue of stickiness on your palm: kids are dirty and love ice lollies and other sticky substances. But Spain’s Socialist leader shook hands with a young black boy while on the campaign trail and was caught on camera wiping his hand afterwards. The video was uploaded to Twitter by the youth wing of the conservative Popular Party, who accused Sánchez of racism. Sánchez hastily replied citing his commitment to equality and diversity but the story can’t have helped this close to the election… Spain’s left-wing protest party Podemos decided to present their policies in a way they were sure Spaniards would understand: in the pages of an Ikea catalogue. Everyone loves Ikea, but that’s because of the cool Scandinavian furniture and candles, not because tthey are desperate to hear about election pledges.

Are Podemos trying a little TOO hard? Spaniards didn't take long to start mocking the catalogue and pointing out a number of discrepancies hidden within its pages…

More than any other candidate, Albert Rivera, the leader of centre-right party Ciudadanos, feels the heat. That is to say, he sweats when under pressure. During a recent head-to-head debate with Podemos leader Pablo Iglesias, a comical, almost cartoon-like bead of sweat escaped Rivera's  brow… and it did not go unnoticed.

Ciudadanos members claimed the TV station turned off the air conditioning when it was Rivera's turn to speak. Either way, it made him look nervous under pressure and attracted some unwelcome attention on social media.