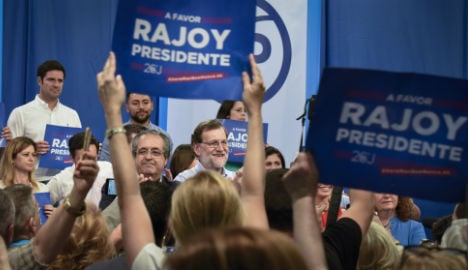 Spanish Prime Minister Mariano Rajoy meets supporters on the Spanish Canary island of Tenerife on Saturday. Photo: Desiree Martin/AFP
If as expected no party wins an absolute majority, acting rightwing Prime Minister Mariano Rajoy is banking on fierce rivalries on the left to stay in power, as Podemos and the Socialists are unlikely to ever agree to get in bed together.
The result of next Sunday's vote is expected to be much the same as it was in inconclusive December elections when new groupings Podemos and business-friendly Ciudadanos burst onto the scene and uprooted Spain's long-standing two-party system.
They took millions of votes away from the traditional conservative Popular Party (PP) and Socialists in an unprecedented result that left a hung parliament, after which no party was able to agree on a coalition government, prompting fresh elections.
The PP is expected to come first again, and poll after poll shows that a coalition led by Podemos that also includes green-communists Izquierda Unida and its allies would come second, with a roughly four-percentage-point lead over the Socialists.
This would make the coalition the country's main opposition force, a remarkable result for Podemos, born just over two years ago out of the Indignados protest movement, and a slap in the face for the Socialists.
“The big problem that the Socialist party faces is not only to be overtaken by Unidos Podemos, but also its loss of identity as a party,” says Fernando Vallespin, politics professor at the Autonomous University of Madrid.
Pablo Iglesias, the charismatic, pony-tailed chief of Podemos, has already brushed the Socialists aside and positioned himself as the only alternative to the strait-laced and sedate Rajoy, who came to power in 2011.
Rajoy retorts that he is a safe pair of experienced hands and has warned against “radicals” such as Alexis Tsipras, Greece's prime minister and leader of the far-left Syriza party, a Podemos ally.
After a devastating crisis, the 61-year-old boasts of having put the eurozone's fourth largest economy back on track with strict austerity measures and forced unemployment down to 21 percent, even if it remains the second highest rate in the European Union.
But Iglesias, 37, argues austerity has not worked and wants to increase spending by €15 billion ($17 billion) a year rather than cutting it.
Like Rajoy's other rivals, he also says that unemployment has come down at a cost — that of more precarious jobs.
For all his visibility though, and even if he beats the Socialists to second place, Iglesias will be far from getting the keys to the premiership.
With no absolute majority, political leaders will have to go back to the negotiating table to try to form a coalition government — with more pressure to succeed this time to avoid a third general election.
Iglesias has said he wants to approach the Socialists to form a “progressive” left-wing government.
But these have made no secret of their aversion to a party that wants to eat them alive.
“He's the king of hypocrites,” says Oscar Lopez of the Socialist campaign.
The Socialists also disagree deeply with Podemos' support for a Scotland-style independence referendum in the northeastern region of Catalonia, making such an alliance all the more improbable.
Meanwhile Rajoy continues to propose a “grand coalition” consisting of his party, the Socialists and Ciudadanos, although that idea fell flat on its face after the last elections.
But instead, the conservatives may well manage to push a minority government through the obligatory parliamentary vote this time with the abstention of Ciudadanos and the Socialists.
“It's the most probable scenario by far,” says Pablo Simon, politics professor at Madrid's Carlos III University.
A member of the Socialist party campaign, who wishes to remain anonymous, concurs.
“It's more likely that our only option will be to abstain rather than govern with Podemos,” he told AFP.
Will that be with or without Rajoy, however, given all his rivals want him to step down?
“There will be huge pressure for him to leave,” says Vallespin.