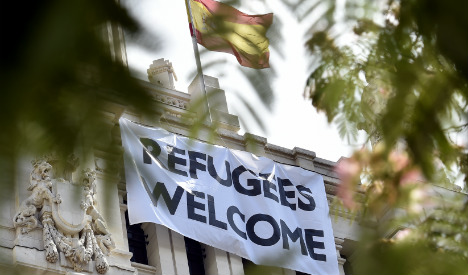 But despite the Syrian refugee problem dominating headlines, it was in fact Ukranians (795), followed by Venezuelans (405) who made up the largest number of asylum seekers to Spain.

Only 325 Syrians formally applied for asylum in Spain, revealed the report by EU agency Eurostat.

Overall the number of those seeking asylum in Spain dropped 35 percent with just 2,905 applications during the first three months down from 4,435 during the last quarter of 2015.

READ MORE: Refugees welcome in Spain. So where are they?

Across the EU the number of applications in that period dropped by 33 percent compared to the previous quarter, with 287,100 people applying for international protection in the first quarter of this year.

One in three asylum seekers who came to Europe in this period were Syrian. Spain received just one percent of all asylum applications to Europe.

Spain received a total 14,600 first time asylum applicants in 2015, according to Eurostat, but has continued to face pressure from its own citizenship to take in more asylum seekers and criticism for its initial reluctance to adopt the EU quota agreement.