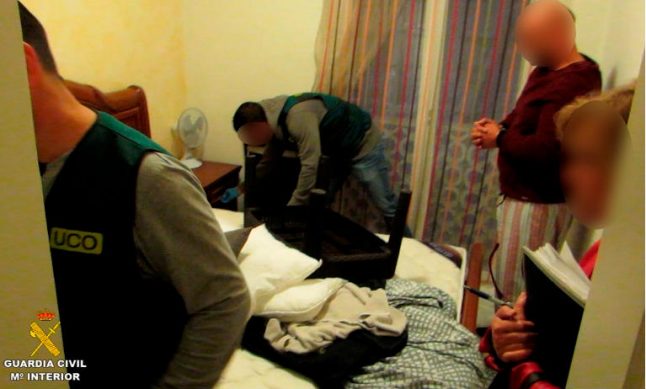 Emiel Brummer was arrested in his pyjamas. Photo: Guardia Civil

Spanish police said on Thursday that they had arrested a Dutchman suspected of being the right-hand man of a European drug boss.

Emiel Brummer was arrested in April in the seaside resort of Torremolinos on the Costa del Sol, under a joint probe with Dutch police coordinated by the EU's law enforcement agency Europol, the Guardia Civil police force said.

He was extradited to the Netherlands where he is currently held, they said in a statement.

The 42-year-old “met frequently with the chiefs of drug cartels from South American countries,” they said.

Brummer is considered to be “the lieutenant of Robert Dawes,” a suspected drug kingpin who was seized last year after a painstaking investigation, they said.

Dawes was detained in November in a raid on his luxury villa in the southern resort of Benalmadena where he lived with his family and bodyguards.

He is suspected of heading one of Europe's biggest criminal organisations devoted to drug trafficking and money laundering.

Dawes has since been extradited to France, where he is wanted in connection with the discovery of 1.3 tonnes of cocaine in a Paris airport in 2013.

According to Spanish police, Brummer “frequently travelled from the Netherlands to Malaga province where until Dawes' arrest, he received instructions regarding the trafficking and distribution of drugs arriving in European ports, particularly Antwerp and Rotterdam.”

They added that he continued to develop drug operations after Dawes' arrest, “and was linked to various murders of rival Dutch gang members.”

A statement said that he is suspected of being involved in the gunning down, using an AK-47, of at least 15 people during the last three years, in “a settling of scores”