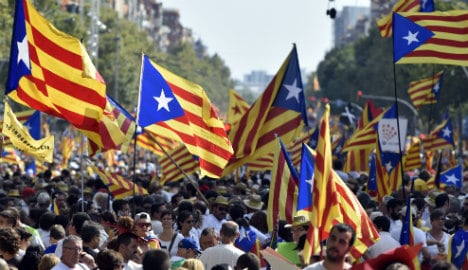 The vivid red and yellow Catalan separatist flag is a familiar and colourful sight on balconies across
Barcelona, though many have become faded and torn over the years.

But scores of Catalonians are getting weary of political infighting over the region's independence drive which has dragged on for years – even those who back secession.

“One starts to get tired, it has been a long time and there have been few advances,” said 70-year-old Josep Cuspinera at his small shop which sells pots and pans in Barcelona's strongly pro independence Gracia district.

“I'm sick of the topic,” she said, after the pro-independence coalition that rules the region fell apart last week when its most radical component – the anti-capitalist CUP party – refused to back the regional government's budget.

The development dealt a blow to the coalition's planned 18-month roadmap for independence from Spain by 2017, which it announced after winning a parliamentary majority in regional elections last September.

Without a budget the head of the Catalan regional government, Carles Puigdemont, is not able to take steps to put the roadmap in place, such as setting up a tax system and state structure for Catalonia.

He has called a parliamentary vote of no confidence for September, which could trigger fresh elections if it goes through – the fourth since 2010.

Spain's economic downturn, meanwhile, prompted renewed debate over how Catalonia – a region with its own widely spoken language and distinct culture – is funded by the central government in Madrid which collects most taxes.

Many Catalan nationalists argue the region pays out more than it receives.

Since 2012 hundreds of thousands of people have flooded the streets of Barcelona on September 11th, the region's national day, calling for the right to vote on a potential split from Spain.

In November 2014 the region held a symbolic independence referendum.

“I see independence very far off, I would even say I barely see it,” said Cuspinera at his shop in Gracia, where 60 percent of voters cast their ballots for pro-independence parties in the last regional polls.

“Here many people want independence but all these fights between politicians exhaust and demotivate them,” he added.

Catalans have dealt with infighting among politicians over separatism for years now.

Artur Mas governed Catalonia between 2010 and 2015, when his conservative nationalist Convergence and Union (CIU) party dissolved due to divisions over independence and graft scandals.

The pro-independence camp united in an alliance, “Together for Yes”, for the September regional election in Catalonia, winning 62 seats in the 135-seat assembly.

The far-left separatist CUP party got ten seats, giving the pro-independence camp a parliamentary majority. But divisions over budget policy have revived the split among secessionists.

“We have protested 50 times and we vote every two years but nothing changes,” said Gemma Boix, a 39-year-old administrative assistant who backs independence for Catalonia.

Puigdemont acknowledged that without the backing of the CUP “we can't continue”.

But for Martinez, who opposes independence, this is good news.

“We have other more serious problems here. I clean houses all day and my husband works a thousand hours a month but we can barely make ends meet,” she said.

“And they only talk about independence!” she added, repeating the arguments of Mas' critics who accuse him of fuelling the separatist drive to hide corruption in his party and his economic mismanagement.

Santiago Lapa, a 44-year-old insurance salesman, points out that 52 percent of all Catalan voters did not pick a separatist party in the last regional election.

“A lot of time and money lost for something that many people don't want,” he said.

“This has gone on for five years and in five years everything will be the same. We will be part of Spain, paying taxes to Madrid and with Barcelona playing in the Spanish league,” he added.