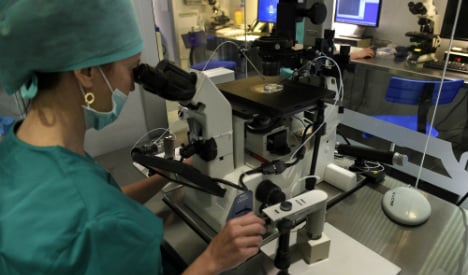 An employee at Eugin clinic prepares sperm and an egg to be fertilised. Photo: Lluis Gene/AFP

“Making parents out of our patients,” reads an ad in Madrid's metro for one of Spain's many fertility clinics that have opened their doors to husbands and wives, same-sex couples and single women thanks to lenient laws.

Every year, more than 5,000 people walk through the glass doors of the Madrid IVI clinic, where couples sit in a hushed atmosphere, English, Spanish and French wafting through the waiting room to help foreign customers, 20 percent of all its patients.

Sitting in his office behind the reception, where black-and white photos of babies' hands hang on the wall, director Juan Antonio Garcia Velasco says that Spain has become a “reference point” for fertility treatment.

He points for instance to “being able to provide treatment that is banned in many countries.”

A law that came into force in 2006 allows women aged 18 or over – be they single, in heterosexual or same-sex couples – to access assisted reproductive technology such as artificial insemination or in vitro fertilisation (IVF).

By contrast, the legislation in neighbouring France bans single women or same-sex couples from undergoing such treatment.

The identity of sperm and egg donors is also kept secret in Spain.

And unlike in other countries such as Britain or France, there is no shortage of eggs in Spain, which already has a strong tradition of organ donation.

Last but not least, Spanish clinics accept women wanting to conceive aged up to 50.

As such, in the latest figures available, some 15,600 treatments took place in Spain in 2011, compared to 3,300 in the Czech Republic, 2,100 in Britain and 1,100 in Belgium, according to the European Society of Human Reproduction and Embryology.

Emmanuelle Lino, whose name has been modified as have those of other women who would only talk on condition of anonymity, is one such satisfied customer in Spain.

The 45-year-old Frenchwoman has only just given birth to a little boy conceived in a Barcelona clinic thanks to an egg donation.

Married, she had tried IVF in Paris, to no avail.

And by the time she wanted to try again, she was unable to as she was older than the 43-year-old age limit fixed by the French social security system. Egg donations in France are also rare.

She had initially thought about going to Belgium, another prized destination for women with fertility problems, but “I was told there would be a huge wait.”

Many of the Spanish clinics' foreign customers are women in their forties, in relationships with men, who come for egg donations and associated IVF treatment.

Others ask for their eggs to be frozen – a technique that allows them to conceive later in life.

And Spanish clinics make it as easy as possible for potential foreign customers, with services in their mother tongue.

“I filled in the contact form online and they called me back the very next day, in German,” says Silke Khrause.

This 46-year-old single woman who lives near Dusseldorf in Germany had initially thought about going to Denmark for an egg donation, but “everything was in English, it was really complicated.”

So she chose Barcelona.

The clinics are also competitive price-wise.

But she eventually settled for her home country, where unlike Spain the donors' identity can be revealed to children born from this procedure once they turn 18 – an option she wanted to have for her future son or daughter.

Spain has some 200 gynaecological centres, more than any other European nation.

According to research firm DBK Informa, the sector is doing well, helped by a general trend of Spanish or foreign women wanting to get pregnant later in life, lenient legislation and foreign demand.

The sector earned €365 million in 2014 – a turnover that is expected to increase five to six percent a year, it says.

As a result, Spanish fertility clinics have expanded abroad.

IVI for instance has clinics in Portugal and Italy as well as Spain.

But French gynaecologist Joelle Belaisch-Allart warns that allowing pregnancies for older women carries many risks, such as diabetes, premature birth and miscarriages.

“For me it's 45 years old maximum,” she says, pointing out that once a woman gets treated abroad and comes home, she and other doctors are left having to follow their potentially-risky pregnancies.

And far from being a walk in the park, such procedures are difficult, and not always successful.

So it was for Sabrina Ferrant, a single French woman who resorted to crowdfunding to collect some of the €5,500 she needed for IVF.

Suffering from endometriosis, a condition that can lead to difficulties in getting pregnant and even infertility, she did it in Spain as France only allows such treatment for couples.

And it was worth it. Now 33, she is pregnant with twins. 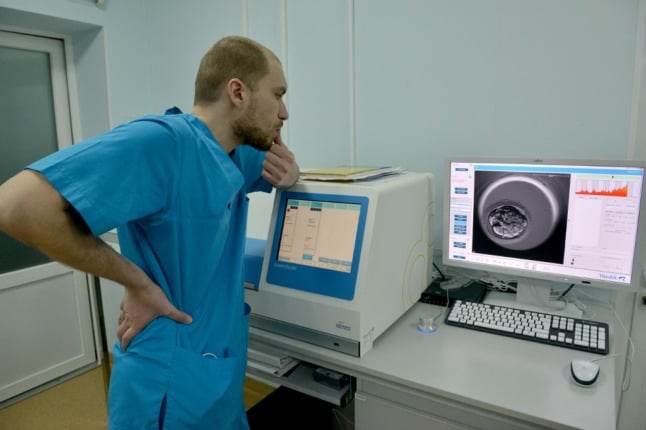