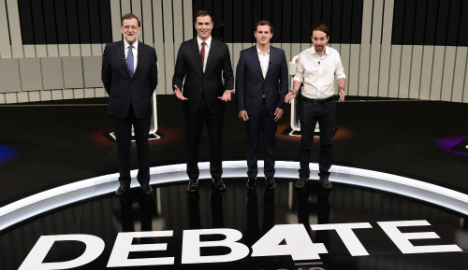 The event brought together the four main candidates for June 26th elections in a country better used to one-to-one debates between the leaders of two, long-standing parties – the conservative Popular Party and its arch-rivals the Socialists.

But elections last December put an end to this system with the rise of upstarts Podemos and centre-right Ciudadanos, leaving a hung parliament divided broadly among four parties which failed to agree on a coalition government, prompting fresh polls.

During the debate acting Prime Minister Mariano Rajoy was the focus of criticism from the three, younger candidates who slammed the spending cuts he implemented after he came to power in 2011.

They also criticised high unemployment and the repeated corruption scandals hitting his party.

But he dodged the blows, at times using Greece as an example of the path crisis-hit Spain could have gone down in a thinly-veiled dig at Syriza ally Podemos.

“When I came to power, Spain was threatened with bankruptcy… and now it isn't,” he said.

“They all say that they're going to fix things as if by magic, but that's also what (Prime Minister Alexis) Tsipras said in Greece.

“The Spanish all know that things are better, they're not good, but they're better,” Rajoy added, pointing to the country's 3.2 percent GDP growth in 2015 and drop in unemployment, which at 21 percent in the first quarter still remains the second highest in the eurozone after Greece.

Podemos leader Pablo Iglesias, sporting jeans and a white shirt that contrasted with the other three candidates' suits, retorted that millions of Spaniards were now at risk of poverty.

“Forty-five percent of Spanish families cannot afford to go away for a week's holiday,” said Iglesias, whose party has formed a coalition with Izquierda Unida, another far-left grouping, for the elections.

“People have one thing clear, if policies that have been implemented don't work, it makes sense to change them.”

Polls predict the upcoming elections will result in a hung parliament just like they did in December, which means political parties will have to go back to the negotiating table and try to agree on a coalition.

But they also say that the Socialist party is expected to be relegated to third place and overtaken by Unidos-Podemos, the coalition led by Iglesias.

During the debate, Socialist party leader Pedro Sanchez laid into both Rajoy and Iglesias, whom he accused of torpedoing his attempts to form a coalition government following the December elections.