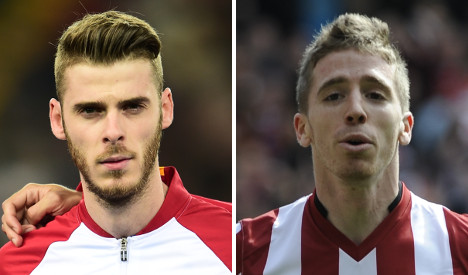 “I am the first one to be surprised by this report. I deny it, it is false and nothing more, it is a lie and false,” De Gea told a press conference at Spain's training base for the European Championship finals.

De Gea said he was “desperate” to take part in Euro 2016 and would not be put off his team duties.

Better known as Torbe, the producer was detained in April for alleged crimes including heading a prostitution ring, sexual abuse of under-age girls and human trafficking.

The witness reportedly said she and another woman were forced against against their will to participate in a party in 2012 organised by De Gea, in which they both had sex with footballers.

They were alleged to be 23-year-old Muniain and another unnamed player, according to Eldiario.es, which published photocopies of the police report.

She did not mention having had sex with De Gea.

De Gea, 25, said the claims were all completely false and his lawyers would be taking action.

“If it is possible it gives me even more strength to be here with the national team,” he said.

“I have also had great support from my teammates and I am desperate to take part in this Euros.

“It is false what is coming out in the press and it will be in the hands of my lawyers.”

The witness allegedly gave the testimony to police in June 2015 and then again in May, and the existence of such a party comes from her testimony alone.

A judicial source told AFP on condition of anonymity that a police report had been handed over to a judge in the probe on Allende which involved footballers. The source would not confirm its content or the identity of the players.

The allegations have made huge waves – coming just three days before Spain begin their attempt to win a third consecutive European crown – with speculation as to whether De Gea will be sent home.

“I don't see why this would happen,” a source close to De Gea, who also wished to remain anonymous, told AFP.

“David is talking to his team of lawyers. He is not involved in any sex abuse.

“He does not appear as one of the players who took part in the encounter.”

De Gea is locked in a battle to get the nod over veteran keeper Iker Casillas for Spain's opening match of Euro 2016 against the Czech Republic on Monday.