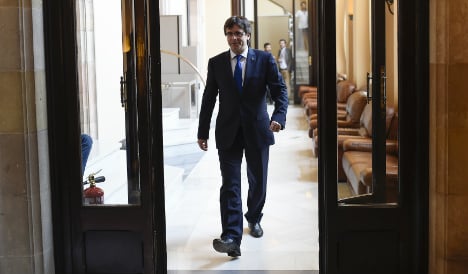 The development deals a blow to the coalition's planned 18-month roadmap for independence from Spain by 2017, which it announced after winning a parliamentary majority in regional elections last September.

Catalonia has so far done little to implement the plan, which calls for the regional government to create basic laws, a tax system and state structure for the wealthy, industrialised northeastern region whose capital Barcelona is a major tourist draw.

Further complicating the project, the far-left, anti-capitalist CUP party that makes up the coalition turned against it on Wednesday, refusing to back the government budget for 2016 and joining other non-independence opposition parties in voting against examining it in parliament.

“We can't continue in these conditions, we're going nowhere with such volatile bases,” Catalonia's pro-independence president Carles Puigdemont said after the vote.

“My government has lost the necessary majority to be able to work and accomplish our government plan,” he added, announcing that he would submit himself to a vote of no-confidence in September.

Opposition parties will most likely vote against him, and if the CUP also decides to reject Puigdemont, the no-confidence motion will go through, which will mean negotiating a new regional government or calling fresh elections – the fourth since 2010.

CUP lawmaker Joan Garriga said the road to independence from Spain had not been blocked with his party's rejection of a budget it believes maintains austerity in the heavily-indebted region.

But the Catalan government will now be forced to extend the 2015 budget, giving it a limited margin for manoeuvre, particularly where its independence plan is concerned.

Support for independence has soared in recent years in Catalonia – a region of 7.5 million people with its own language – but it does not have the backing of a strong majority.

Pro-independence parties including the CUP won a majority in the 135-seat regional Catalan parliament in September but their share of the vote was 48 percent, giving their opponents a powerful argument against secession.