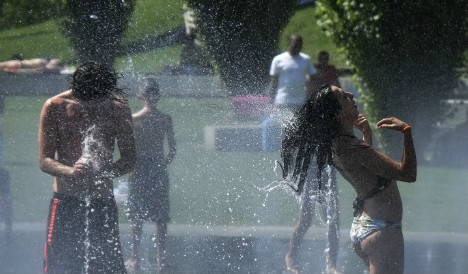 Cooling off in the heat. Photo: AFP

Spain’s national weather agency, Aemet, has put seven of the country’s provinces on amber alert for high temperatures, as the mercury soars across the country.

Most at risk are Córdoba, Seville, Jaén and Granada, where temperatures will soar to 39C on Wednesday, while Badajoz, Zaragoza and Valencia are expected to experience temperatures of between 36C and 38C.

The mercury is expected to rise to over 40C in some places later in the week. Aemet said that on Wednesday temperatures would be “significantly high” in the Ebro Valley and in the south of the country.

The amber alert warns people not to undertake intensive physical activity outside because of the high temperatures.