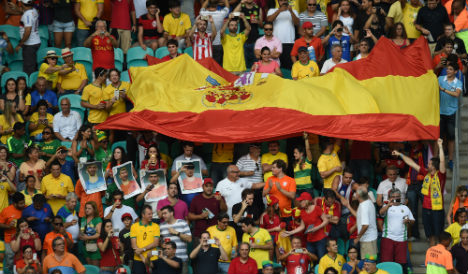 In the run-up to Euro 2016, the two women had set up a stall with supporters group 'Barcelona con la Seleccion' – “Barcelona for the national team”.

The group claims the two women had their hair pulled and were kicked and pushed to the ground by a group of five hooded men on Saturday afternoon.

“Get out of here, Spanish whores, we’re going to kill you,” the attackers shouted according to Spanish sports newspaper Marca.

The fan club had set up a stall in the city to promote the Spanish national team ahead of Euro 2016, which starts on Friday.

“A group of bigots – most of them hooded – approached,” Barcelona con la Selección said in a statement released after the attack.

“They knocked down the tent and, even more sadly, they brutally attacked two women, pushing them to the ground, hitting them, pulling their hair and robbing one of the women's bag.

“In the struggle, one of the victims had the misfortune to fall in the middle of the street, which has, according to the medical report, grazed her skin, caused bruising, and more.”

The attackers ran away after the attack, but a second group arrived in a car and spat on the women, according to the fan club.

An investigation is currently underway and Catalan police are trying to identify the attackers.

The vicious attack highlights heightened tensions as Catalonia independence fervour grows across the northeastern region, which has put itself on a collision course with Madrid.

Catalonia has set itself on the path to breaking away from Spain, after electing a majority of separatist lawmakers in the regional parliament last November.  The Catalan parliament has passed a resolution aimed at creating an independent republic by 2017.