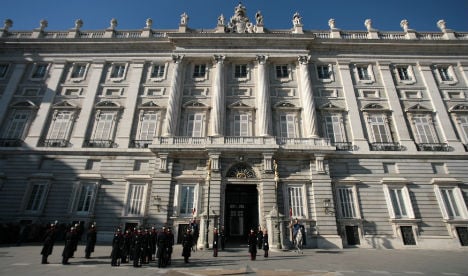 The revelations will cause some embarrasment to the Royal Palace. Photo: AFP

An elderly relative of the King, her son and two of her grandchildren, paid less than two percent to Spain’s treasury in order to make their previously hidden income official, according to a report by Spanish digital newspaper eldiario.es

According to what has been dubbed “The Castellana Papers” Alicia de Borbón Parma, the 98-year-old dowager Duchess of Calabria, her son Carlos de Borbón-Dos Sicilias (who died last year), and his two children, Cristina and Pedro paid €73,437 to the tax office to declare €4,000,186 held in the Swiss bank Lombard Odier.

The amnesty, which was introduced by the conservative government of Mariano Rajoy in 2012, was widely criticized for pardoning tax evaders with a reduced rate while the government increased income and service taxes on most taxpayers.

Its tax amnesty offered a reduced tax rate of 10 percent on up to five years of previously undeclared earnings for individuals who made their hidden income official.

But it emerged that the four royal relatives had paid just 1.8 percent of the €4m in order to avoid tax evasion penalties during a time when Spaniards were being asked to tighten their own belts as the nation fought to stave off a bail-out.

The huge sum was reportedly inherited from the estate of María Cristina de Borbón-Parma Habsburgo, who was the niece of king Alfonso XIII (who reigned from 1886-1931) and aunt to King Juan Carlos, the father of the current head of state.

This branch of the Borbon family occupy the second line of succession after the descendants of King Juan Carlos.

The revelations come just weeks after Pilar de Borbón, the older sister of the former Spanish King Juan Carlos and the aunt of King Felipe was named in the Panama Papers.

Meanwhile, King Felipe's own sister is currently standing trial for tax fraud related to a corruption scandal embroiling her husband.