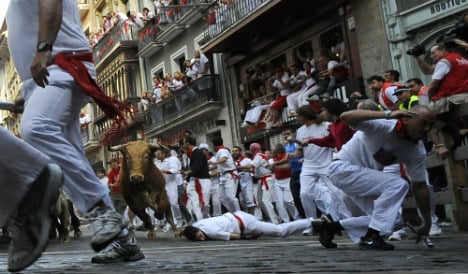 President Obama is to make his first trip to Spain in July and his travel dates coincide with one of the country’s most famous festivals – the running of the bulls in the northern Spanish city of Pamplona.

But could President Obama’s scheduling be more than just coincidence?

A White House spokesman on Monday said that the president was interested in visiting the festival made famous by Ernest Hemingway that draws hundreds of thousands of revellers to the city each year.

President Obama will visit Spain from July 9th – 11th as part of a European trip during which he will also attend a Nato summit in Poland.

In a White House press conference on Monday, spokesman Josh Earnest said: “I suspect that he probably is interested in attending San Fermin,” but said that he was not sure if the president’s schedule would allow it.

San Fermin in Pamplona takes place from July 6th – 15th. The city’s population swells to over a million people during the festival, which is world-renowned for its running of the bulls, during which brave – or foolhardy – people run through the streets pursued by charging bulls.

There were 10 gorings during the 2015 festival, including a British and an American man.

It is unclear if President Obama were to attend, whether he would take part in the bull runs or just watch from a safe distance like the majority of visitors.

His attendance at the fiesta, with its hundreds of thousands of often enibriated visitors crowded into narrow cobbled streets, would pose a security nightmare.

The president's possible attendance at the festival has drawn criticism from animal rights campaigners, who argue that the running of the bulls is cruel and should be banned.

“It's sad that after so many years, such an important visit can be stained by the terrible image of bulls running to death (because the bulls running in the morning die in the evening). It's sad that Spain stills export this “fiesta y siesta” image, that this important visit won't be able to make it through Spain without experiencing animal abuse,” Claudia Mañas, from Spain's animal rights party, Pacma, told The Local on Tuesday.

“We are a much more than party, paella and bullfighting and the world has to see it. This is a good chance to show how much cultural wealth Spain has that doesn't involve abusing and killing an animal. We need to start showing the best traditions we have, not the worst, so we hope Obama can make it through Spain avoiding any celebrations that involve abusing animals,” she added.
President Obama will visit Seville and Madrid during his trip when he will meet with Spain’s King Felipe during his visit, as well as acting Prime Minister Mariano Rajoy.