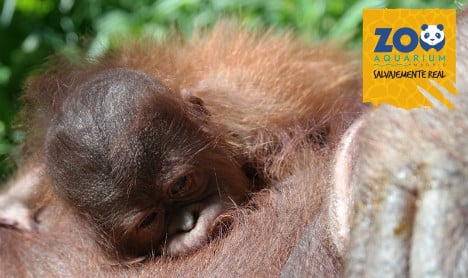 The cute baby orangutan was born on May 29th in Madrid’s Zoo-Aquarium, much to the delight of zoo keepers, visitors and animal lovers around the world, who watched the birth live on video app, Periscope.

“The baby was born to orangutans Surya and Dahi after an eight and a half month pregnancy in a natural birth that surprised vets with its speed,” Madrid Zoo said in a statement.

The baby weighed 1.5kg and mother and baby are both doing well the zoo confirmed.

The new baby joins the zoo’s group of Bornean orangutans, which includes its mother and father, Surya and Dahi, as well as the group’s other female orangutan, Kedua, the new arrival’s big brother, Sungay and his playmate, Boo.

The new arrival and its mother are currently living apart from the other orangutans while they bond, as is normal with the species.

The zoo will soon open polls on its Facebook page for the public to vote to name the new arrival. The only stipulation is that its name should begin with a letter ‘s’ like that of its mother, Surya.