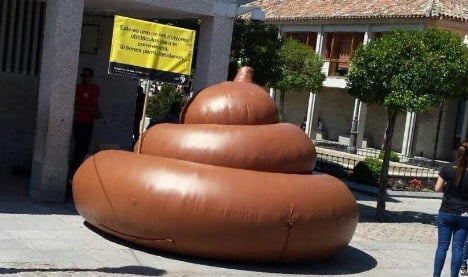 The blow up sculpture, which is three metres wide and over two metres high is designed to serve as a reminder to pet-owners to clean up after their pooches.

Authorities in the town of 22,000 residents in the foothills of the SIerra Norte just 25 km northwest of the capital claim that council services have to rid the streets of up to half a ton of faeces left by irresponsible dog owners each day.

“Torrelodones has around  6,000 dogs and let’s say they do an average of three dumps a day, that is around 15,000 separate poos producing some 500kg of excrement a day. Many owners just don’t pick up,” Ángel Guirao, spokesman for the town council explained.

“That is more or less what this inflatable represents, the amount of poo left on the streets across the town each day. We are asking dog owners, in a fun non-aggressive way, to realize the importance of clearing up after their pets.”

Residents in the town are being encouraged to take selfies alongside the ‘giant poo’ and post it on social media with the hashtag #nomascacas – No more poos.

The town has also installed permanent smaller 'poo sculptures' in brown painted concrete in those areas most affected by deposits.

They are accompanied by a sign that reads: “This is one of the greatest obstacles to community spirit in our town. If you own a dog, please help us.”

Councils across Spain are struggling to tackle dog owners who fail to clean up after their pets, with several towns introducing the use of DNA testing on faceces to track down the culprits.

In April, Madrid's mayor announced strict new rules to punish those who fail to scoop the poop, with offending owners made to clean the streets of the capital at weekends.