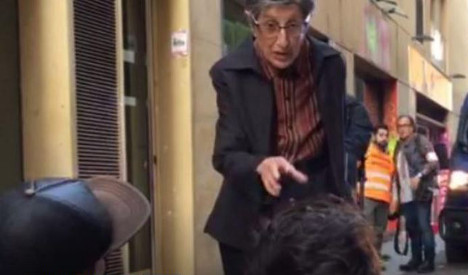 Carmen Gutiérrez has become an Internet hit after a video of her scolding protesters in Barcelona’s Gràcia neighbourhood went viral.

The protesters have been demonstrating for a week and a half after they were evicted from a long-time squat in Gràcia.

The former bank had been used since 2011 as a community centre and had been left alone by authorities, especially after former mayor Xavier Trias started paying the rent on the building using public funds – something which had been unknown publicly until recently.

Ada Colau, the current mayor and a former shining light in the eviction protest movement, said taxpayers shouldn’t have to pay the rent after Trias’ actions came to light, and left the decision to the courts, which issued an eviction order.

Gutiérrez approached a group of protesters who staged a sit-in to block the street on Monday to give them a piece of her mind, a discourse that was caught on film and posted by Barcelona newspaper La Vanguardia this week.

“Do you know a place where I can live without having to pay, because I’m short on cash?” she asked the protesters sarcastically.

As they tried to argue with her that the bank was once a place for everyone, she quickly fired back.

“The building has an owner,” she said.

“Trias paid, right? Well, this money was also stolen from all of the citizens of Gràcia, Barcelona, and Catalonia, and it should be returned to us,” she concluded.

Newspaper La Informacion reported that Gutiérrez is a retired teacher who worked her entire career at a public school in Gràcia.

By Thursday morning, the video of her had been viewed more than 150,000 times on YouTube and she had won armies of fans on Twitter.

“Between the grandma and the occupiers… I'm with the grandma!” wrote one Twitter user, who also the hashtag 'MuyFan'.

Right-wing political party Vox also claimed Gutiérrez as one of their supporters in a statement on Tuesday, saying that she “couldn't help but to stand up to radicals, chiding them for their attitude and asking them to abandon their hostility”.

Since the eviction, protesters have been clashing off and on with police in the neighbourhood, with officers firing rubber bullets and activists smashing windows and lighting bins on fire.

Neighbourhood and city officials have been meeting with supporters of the protest to try to resolve the matter – and restore some peace for the locals there – but progress has been slow, according to El Pais.