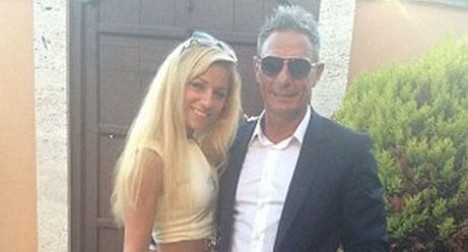 A jury at the court in the southern city of Malaga on Friday found Maria Kukucova, 26, guilty of killing Andrew Bush, 48, by shooting him twice in the head and once in the shoulder.

It said Kukucova was “obsessed” with Bush and was “driven by a state of passion” when she shot the former jewelry store owner.

Kukucova was upset by the end of her romantic relationship with Bush as well as over the “loss of social status and lifestyle”, the jury added.

During the week-long trial, Kukucova told the court that she had never meant to harm Bush, and had acted in self-defence during a violent struggle at his home in the Mediterranean town of Estepona, near Malaga, on Spain's Costa del Sol.

The presiding judge on Tuesday sentenced Kukucova to 15 years in prison for Bush's murder. She was also jailed for six months for breaking into his home.

State prosecutors had sought a 20-year jail sentence for Kukucova while lawyers representing Bush's family had asked for 27 years if she was found guilty.

The murder happened on April 5th, 2014 when Bush returned from a trip to Britain to his home in Estepona with his new girlfriend.

Prosecutors said Kukucova, who had been waiting inside the house without Bush's permission, shot him because she became jealous after seeing him with another woman.

After the killing, Kukucova fled to Slovakia. She turned herself in to police four days after the murder and was extradited to Spain.