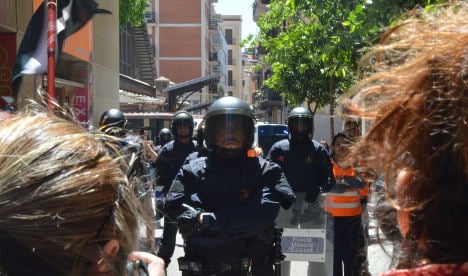 Police stand off against protesters in Barcelona. Photo: Conor DeVries.

The heavy drone of a police helicopter has become a normal disturbance lately in the Gràcia neighbourhood of Barcelona.

A week’s worth of protests have kept the normally quiet barrio very busy and very noisy. After a couple of nights of relative calm, there were resumed tensions on Sunday between the Catalan police and the local protesters supporting the Banc Expropiat.

The former bank was squatted back in 2011 and had been used as a local community centre until the eviction order last Monday.

Up until this point the squatters had been left alone as the former mayor, Xavier Trias, had been paying their rent with public funds since the property was re-sold in 2014.

This amounted to the tune of €65,500 and was unbeknownst to the squatters or to the public. It is speculated that at the time Trias was trying to buy peace with an election looming and the recent shutdown of Can Vies, a similar centre in the Sants area of the city, which led to four nights of massive civil unrest in May 2014.

The current mayor, Ada Colau, on the other hand, announced that it was inappropriate for the taxpayers to pay the rent and chose to let the courts decide what would become of the building.

“The occupants have made it plain that they’re not interested in any sort of mediation or alternative and therefore it’s something between private persons that has been resolved in the courts,” said Colau last Monday before the court order was carried out.

While it is clear that the court supports the current property owner with the eviction order it produced, it seems that much of the Gràcia community supports the squatters considering the days of protests that have followed.

The Monday of the eviction saw major clashes with police and protesters around the neighborhood. Police were reported to have fired rubber projectiles at protesters while demonstrators lit a cleaning truck on fire, among other damage they caused.

The following night an even larger but peaceful crowd gathered in front of the bank and could be heard cheering as the door to the Banc was re-opened.

But moments later, almost on cue, the police showed up and things immediately turned very tense as they pushed into the crowd, hitting protesters with batons to remove them from the area.

The crowd funneled out into the streets of Gràcia and some continued to play cat and mouse with the police for the rest of the night, pushing dumpsters onto the streets as police gave chase.

Wednesday saw the largest crowd yet as hundreds of demonstrators marched through the neighbourhood's streets while many of the local residents banged pots and pans from balconies in solidarity with the protests.

However, what started as a peaceful protest ended in violence once again with dumpsters being set on fire on Gran de Gràcia along with a number of banks being damaged.

Clashes with police who were stationed around the neighbourhood also resulted in further injuries which totaled 33 people at the time as reported by El Pais.

The following three days were relatively calm with some activities organized throughout, the Banc remaining relatively quiet during the evenings other than the occasional curious passerby.

This could partially be because of Mayor Ada Colau’s call for peace in the area.

“Violence leads to nowhere, it is not the way,” she said. However she also stated that: “We have to look at what’s behind this, residents who are angry and defending a social space with roots in the community [that is] part of the fabric of the neighbourhood.”

One local resident Ru Noble Cordon explained why the occupation has had so much support from the neighbourhood.

“What were they doing in this social space that was so loved?” Cordon questioned.

“Taking care of newborn children, screening films, giving free food to people in need, giving free language lessons, hosting a library, and more. All done by volunteers. Not bad no?”

He went on to muse about the bigger picture of the situation.

“In my opinion what is happening with Banc Expropriat in Gràcia is a collision of two different ideals for seeing the world,” Cordon said.

“One that wants to create new options or ideas outside the commercial system, and the other that is fighting back to keep control of the current rules and system.”

Sunday saw things get violent again as more were injured during further clashes with police who had blocked off access to the Banc throughout the day. Protesters hit police with water and flour and police responded by attacking back with batons and shields.

Overall, though, the day was relatively peaceful; the crowd end their week of protests with a march through the neighbourhood to Plaça de Rovira i Trias. Many were wearing paper masks depicting Manuel Bravo Solano who has quickly become a central figure in this entire story.

He is the current property owner of the bank after he purchased it in 2014 and has been the protesters’ public enemy number one. The squatters are looking directly to him to remove the eviction order and let them return to their previously squatted home.

So far he has yet to speak to the public or lift the eviction and in turn the Banc Expropiat promises further demonstrations this coming week.

If this continues there will be added pressure on Colau to intervene and find a solution to the current unrest.

Conor DeVries is a Canadian freelance journalist living in Barcelona. Contact him at www.conordevries.work.