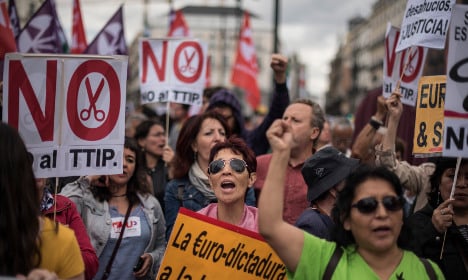 The march was the latest in a series of protests which began on March 22 and has gathered support from around the country. Photo: AFP

The march was the latest in a series of protests which began on March 22 and has gathered support from around the country.

More than 125 political organisations, unions and social groups had urged people to take to the streets of dozens of cities including Seville and Barcelona to “show their indignation” over economic hardship.

Spain's political class has struggled to rally popular support in a country weary of years of austerity — although Madrid did win a reprieve last week from Brussels on fines for overshooting its fiscal targets.

The political fallout from the eurozone crisis saw no party win a majority in December voting, and a second election inside six months will follow in June after all attempts to form a coalition foundered.

The ruling right-wing Popular Party topped the December poll but fell short of an absolute parliamentary majority as two new upstarts — far-left Podemos and centrist Ciudadanos — took votes away from the mainstream conservatives and Socialists.

He said he was marching to “defend my tiny pension” and to protest at “a series of swingeing cuts in education, health…”

Protesters said they feared that the June 26 poll will hand Spain a government which will continue making cuts to public services even at a time when around one in five Spaniards are living close to the poverty line, on barely 8,000 euros ($8,400) a year.

Unemployment is running at around 21 percent — second only in Europe to debt-laden fellow EU struggler Greece.

Marchers also directed their ire at proposals to create a Transatlantic free trade framework between EU states and the United States, and spoke in favour of more humane rules governing asylum for migrants.

Yayo Herrero, a 50-year-old teacher, read out a declaration blaming the banks and the European Union for “taking away sovereignty of the countries” in the bloc” with governments forced as a result to follow “policies that go against peoples' interests and serve capital.” 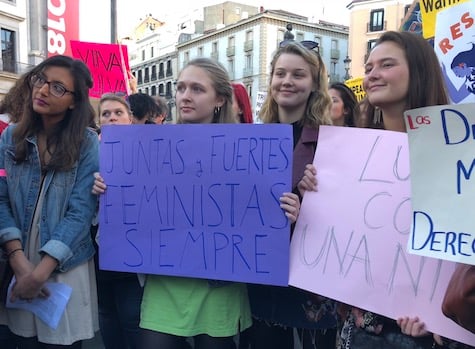 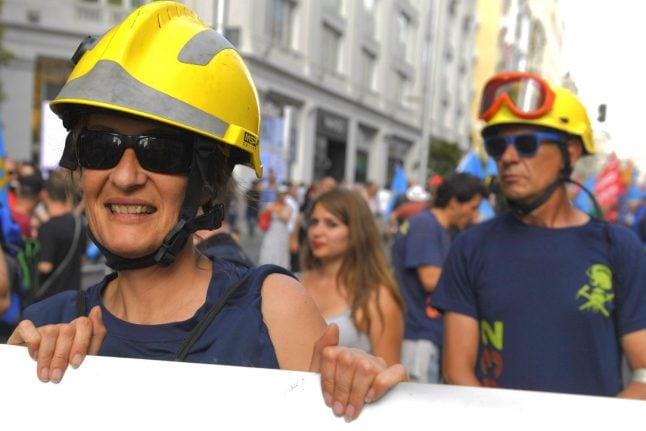 LABOUR
Tens of thousands rally in Madrid for ‘job dignity’ 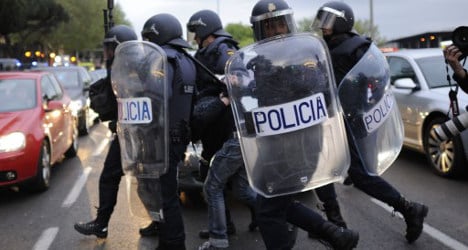 Spain's anti-riot police have been under scrutiny in recent months for what a sector of Spanish society claims are excessively violent methods. Photo: Pedro Armestre/AFP

The move has been backed by Spain's Football Association RFEF, which has already given 18 prototypes to Spain's Police Intervention Unit UIP.

Their aim is to more easily identify aggressors whenever fights break out at Spanish stadiums as well as to assess the behaviour of police officers during altercations.

"It'll be an improvement in safety for everybody," a spokesperson for the UIP told Spanish news agency Europa Press.

Up to now, anti-riot cops at sporting events in Spain have had to carry handheld camcorders to monitor brawls, a method which left a lot of questions unanswered about who the main perpetrators were and if police had used the correct modus operandi.

Spain's anti-riot police have been under scrutiny in recent months for what a sector of Spanish society claims are excessively violent methods during the countless street protests the country is seeing.

Last Tuesday, a Barcelona judge ordered two Catalan anti-riot officers to testify before him after a woman claimed she lost an eye when a rubber bullet hit her during a November 14 demonstration. 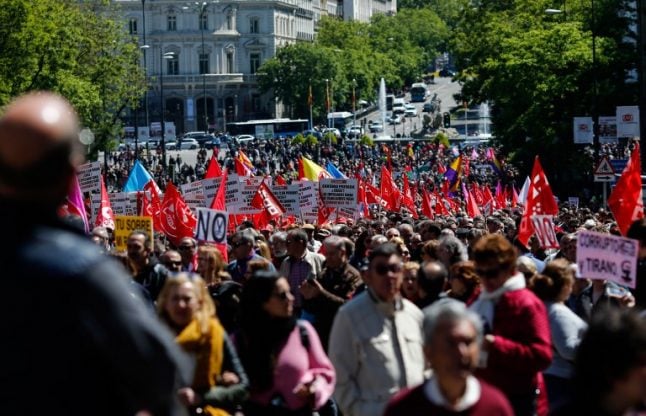 CORRUPTION
Thousands join May Day march against corruption in Madrid 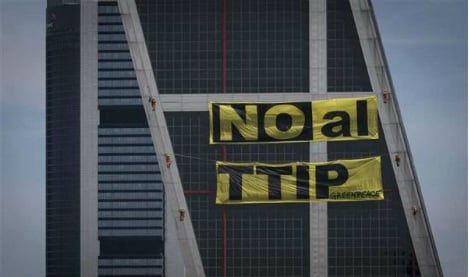