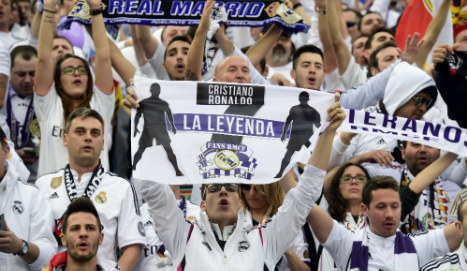 Crosstown rivals Real Madrid and Atlético Madrid – who will meet in the Champions League final on Saturday for the second time in three years – are omnipresent in the Spanish capital.

Bars decorated with football jerseys of the two squads can be found across the city, their football crests can be seen everywhere and the two team's imposing stadiums dominate their neighbourhoods.

The club's museum showcases the many trophies the team has won over the years and received 1.2 million visitors last year, making it the third most visited museum in the Spanish capital after the Reina Sofia modern art museum and the world-famous Prado Museum.

“Every time I go, I have the same fun as when I was a child. When I think that so many great footballers played there,” said Antonio Armero, 52, a member of Real supporters' club “La Gran Familia”.

Atlético's Vicente Calderón stadium, with a capacity of 54,900 spectators, is located further south in Arguenzela, a modest neighbourhood of red brick apartment buildings by the Manzanares river.

It is often regarded as one of the loudest and most boisterous grounds in European football thanks to the fans' songs and chants that rain down from the stands.

“The Calderon feels more like Argentina. We sing, we shout, we live.”

But Atlético is becoming less and less the club of working class people. In 1995 it opened its new training ground and academy in Majadahonda, a wealthy Madrid suburb.

The club is building a new stadium on the site of La Peineta, once a proposed Olympic stadium, east of Madrid's city centre.

Each team has its own supporters' clubs called “penas” that regularly organise events or travel to watch their team play at away matches.

“La Gran Familia” (The Great Family), is one of Real's largest clubs with over a thousand members. They meet in a chic bar with several giant television screens located near the Bernabeu stadium.

Armero said the club used to meet “in a small typical Spanish bar” until its owner retired.

“We had our own room on the second floor, with jerseys, portraits of presidents of the club,” he added.

If Real win their 11th Champions League title on Saturday, their supporters – known as “merengues” – will gather at Plaza de Cibeles in front of city hall to celebrate.

If Atlético win the title, their fans – known as “colchoneros” or “mattress-makers” – will celebrate about 300 metres (1,000 feet) further south on the broad tree-lined Paseo del Prado by the Neptune Fountain.

The headquarters of the Madrid regional government in the central Puerta del Sol are decorated with the crests of both teams.

The San Anton church in the trendy and gay-friendly Chueca neighbourhood has done the same on its doors facing the busy Hortaleza street.

And, for those who refuse to support either team, the capital region hosts several other clubs with thousands of passionate supporters that navigate between the first and second divisions, such as Rayo Vallecano, Getafe CF and CD Leganes.