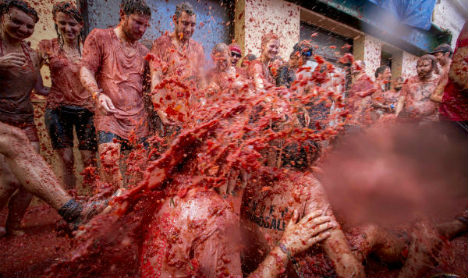 Nigerians in the grip of a tomato blight are furious over Spanish wastefulness. Photo: AFP

The town of Buñol in eastern Spain has earned worldwide fame because each year on the last Wednesday of August, its streets become the site of an epic battle, the world’s biggest food fight with the weapons exclusively made up of tomatoes.

READ MORE: All you need to know about the world's biggest food fight.

But this decades old tradition has now caught the eye of Nigerians who in the midst of a desperate tomato blight have turned to social media to castigate Spain for its thoughtless wastefullness of the red fruit.

Photographs of revellers at La Tomatina have been shared over and over in Nigeria where the nation is suffering what has been dubbed “Tomato Ebola”.

The tuta absoluta moth has ravaged tomato crops across the west African nation, destroying an estimated 80 percent of tomatos in Kaduna state alone, according to a report on the BBC.

With tomatoes so scarce, the price of a punnet has soared from $1.20 to more than $40, which is why photos of festivities in Buñol have caused such a stir.

Photos: While Nigeria Cry Over Tomatoes, See what they’re used for in Spain https://t.co/1HZOvCMsVf via @heraldng pic.twitter.com/Z0jiGjaj22

And while we are desperately looking for tomatoes in Nigeria, in Spain they have so much that they play with it! pic.twitter.com/v2KDpTR784

When the Tomatina comes round, crowds of more than 20,000 flock into the town to await the arrival of trucks filled with the soft squishy fruit.

Mayhem ensues with around 150 tonnes of tomatoes – an estimated 150,000 individual fruits are pelted at participants.

One Nigerian newspaper compiled a gallery of photos from the festival “that will make Nigerians cry ‘where is our God” that included photos like this: But although the festival has in the past attracted criticism for wasting food, authorities insist only rotten tomatoes are used.

Buñol “shouldn't be blamed for the crisis in Nigeria”, the town mayor Rafa Pérez Gil told the BBC.