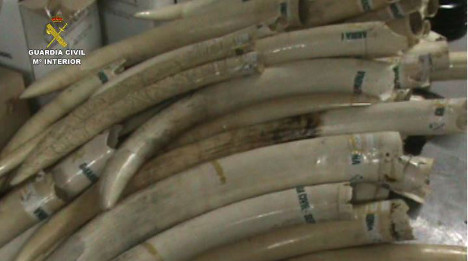 The investigation began in March when authorities received notice from trade inspection authorities that someone was trying to legalize the sale of their €200,000 collection of elephant tusks.

The person claimed that they had inherited the ivory and had an alleged hunting permit from the country of Mozambique dated 1970.

The tusks came from the African bush elephant, Loxodonta africana, the larger of the two species of elephant in Africa and which is considered at risk of extinction, in part due to poaching for its valuable ivory tusks.

Thus 179 countries have signed onto an agreement to prohibit the trade of its body parts, except for in special circumstances.

The Civil Guard's Nature Protection Service (SEPRONA) launched an investigation in collaboration with Mozambique and found that in fact, a permit had been issued in this year for elephant hunting, but it was for killing just one, rather than 37 elephants which the collection represented.

This led the investigators to conclude that the permit must have been falsified.

Civil Guard officers then conducted an inspection of the person's home and seized the tusks. The suspect now faces charges of smuggling goods, falsifying a document and crimes against the protection of flora and fauna.

“This investigation reveals the illegal trafficking of protected, wild animals, considered by the proper authorities to be the third biggest illegal criminal activity worldwide,” the Civil Guard said in a statement, adding that such trafficking amounts to between €8-20 billion each year.

“This type of seizure contributes to reducing the poaching of species for international trade.”

Spain has signed up to international treaties to prevent the illegal trade in ivory.

In April 2012, King Juan Carlos made a public apology after it emerged he had been on a Botswana safari trip to hunt elephants, an activity that disgusted many Spaniards for its cruelty and demonstration of the privileged life of the head of state.

The trip cost the former King his role as president of the conservation group World Wildlife Fund and was considered to be a factor that led to his decision to abdicate in favour of King Felipe VI in June 2014.