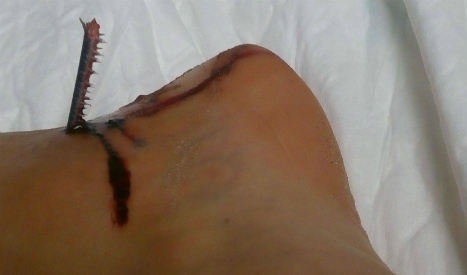 Marcos Gomez Mora was surfing off Torrevieja in Spain’s Alicante province when he felt a sharp pain to his ankle.

The unfortunate water sports enthusiast discovered that he had collided with what is thought to have been a garfish (belone belone), a fish also known as a sea needle for its razor like protruding jaw, which had broken off after piercing his ankle.

He described the awful moment of pain during the freak encounter.

“I was with a group of kitesurfers about one kilometre into the bay when I felt a strong stab to my ankle, I looked down to see that something was stuck through my skin and there was a lot of blood coming from the wound,” he told The Local.

“A friend helped me to shore and to bring down the kite while some sunbathers called an ambulance which arrived within half an hour.  I was transferred to hospital so that they could remove the piece of jaw from the fish,” he said.

“An X-ray revealed that the fish jaw had broken up inside and were lodged near my joint so I had to have surgery to remove it,” he said.

He turned to an expert, Juan Antonio Pujol, a naturalist friend with a PhD in biology, to look for an explanation for what happened.

“I have to rely on Juan Antonio to identify the fish as he is an expert because to be honest I didn’t see the fish either when it stabbed me, or after, as we kitesurfers speed along about 20-30 kmph.

“The fish jumped out of the water and it was bad luck that at that exact moment I happened to be there and it slammed into my foot.”

“What happened is so unusual as to be verging on the impossible,” explained Juan Antonio Pujol, who wrote about the incident on his blog Crónicas Naturalis de Torrevieja alongside some photographs of the injury.

“It’s not uncommon to see garfish leap from the water, usually when they are threatened by a predator,” he said.

“My theory is that the fish perceived a threat from a predator or thought that the surf board was one, jumped out of the water to escape it and in a stroke of a tremendous bad luck dove straight into the ankle of the unfortunate kitesurfer,” he wrote.

But he quipped: “A little pain, a trip to the hospital and a once in a lifetime anecdote … (of course the fish died). Be Strong Marcos!” 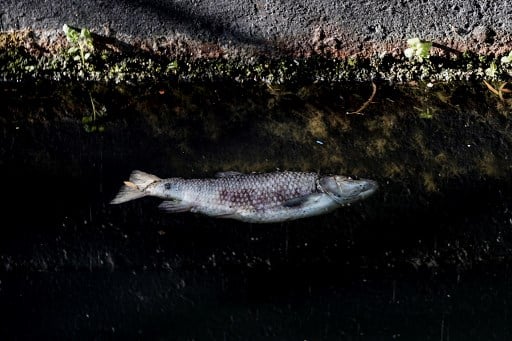