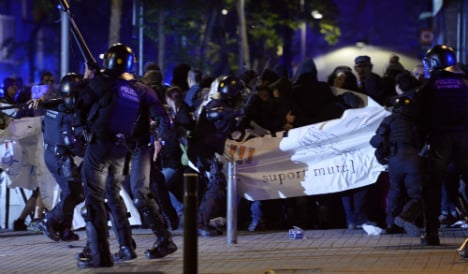 Squatters faced off against police in Barcelona for a second night in a row following their eviction from a former bank in the Gràcia neighbourhood of the city.

On Monday night police fired rubber bullets at the protesters, who in turn set bins alight, smashed windows of local businesses and turned over cars. A truck blazes next to an overturned car on Monday night. Photo: Josep Lago/AFP

Protesters had gathered in Plaça de la Revolució at 10pm and tried to reopen a bank that had been sealed following the eviction.

The bank has been squatted since 2011 and became an unofficial meeting place for squatters, who referred to it as “the expropriated bank”.

Tuesday’s riots, which were less intense than Monday’s began after protesters managed to pull off the metal sheets boarding up the doors to the former bank and force their way back inside.

There were “cries of jubilation” as they re-entered the bank, according to Catalan newspaper La Vanguardia but the celebrations were short-lived. Police arrived on the scene shortly after and baton-charged demonstrators.

Police managed to disperse the demonstrators, who on Monday threatened “five nights of riots” in the city. The situation on the streets of Gràcia was “tense”. Photo: Conor DeVries

Conor DeVries, a Canadian freelance journalist living in Barcelona witnessed the protests on Tuesday night describing the events as a “game of cat and mouse between protestors and police”.

“When I arrived the protest seemed calm, upbeat as everyone chanted and cheered while the door to the bank was re-opened. But moments later, almost on cue, the police showed up and things immediately turned very tense,” he told The Local.

“Within a minute the police had surrounded the entire crowd and they didn't hesitate to rush at them with batons raised. Everyone was quickly forced down a narrow alley and I even lost a shoe in the frantic push of the crowd,” he said. The Canadian was among those corralled by riot police into side alleys. Photo: Conor DeVries

“Eventually the majority of the crowd funneled through the alley and spilled onto the streets.”

While for the most part the demonstrations were peaceful, DeVries witnessed some troublemakers “pushing dumpsters onto roads and cursing at police”.

“Many times I was standing in a group that was simply watching everything happen and a group of police would rush right at us forcing us to run away,” he said. “It was all pretty tense to say the least. It will be interesting to see what happens again tonight.” 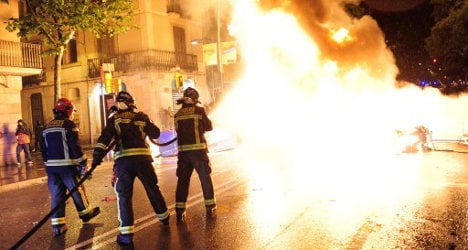