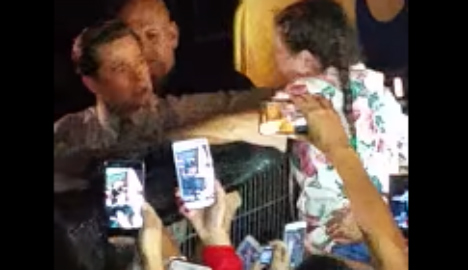 The Hollywood actor saved the girl from being crushed. Screen grab: MARCADI RIVERSAN/YouTube

Brad Pitt became a real-life Hollywood hero this week when he saved a little girl from getting crushed by fans eager to catch a glimpse of their idol, who is currently shooting his latest film in the Canary Islands.

Pitt was met with screams from hundreds of fans but went over to a little girl who was pushed against the metal fence by the surging crowd.

The actor consoled the little girl and had her pulled over the fence, where she was checked by medical professionals according to local newspaper, La Provincia.

The Canary Islands have become a popular location for Hollywood films, with the fourth film in the Bourne franchise, starring Matt Damon, having shot there in 2015.