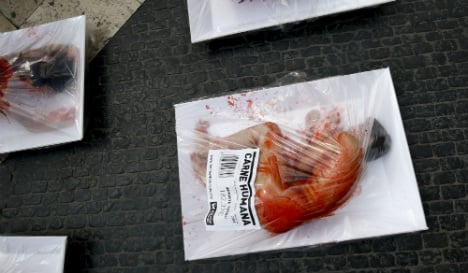 The protesters pretended to be big slabs of meat. Photo: Pau Barrena/AFP

The protestors, from the group AnimaNaturalis, doused their naked bodies in fake blood and were wrapped into Styrofoam trays to resemble pieces of meat. The protest took place on Sunday, May 22nd on Sant Jaume plaza in Barcelona with the aim of educating the public about the benefits of a meat-free diet.

The giant meat packaging trays included the label with the words “carne humana” or human meat in Spanish.

In March, Barcelona declared itself a veggie-friendly city: which includes the writing of a vegetarian guide to the city and encouraging residents to give up meat at least once a week. But protesters complain the city has not done enough.

“We want to get the attention of the city authorities,” said the director of AnimaNaturalis in Spain, Aïda Gascón.

“They pledged in March to join global initiatives such as Paul McCartney’s ‘Meat Free Mondays’ campaign but have not implemented anything yet,” she added.

The protesters are wrapped into their giant meat packaging.

“The impact on the environment, health and the ethical issues surrounding meat consumption are things we can no longer ignore. To ask for at least one day of commitment from the authorities to promote a diet free from animal products is only a small step, but an important step,” said Gascón in a statement on AnimaNaturalis’ website.