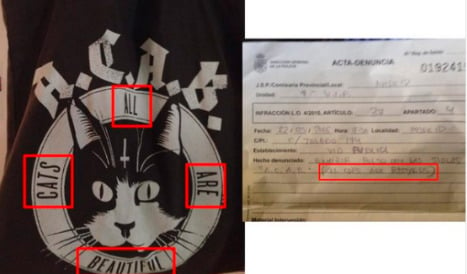 The offending bag and the fine issued over it. Photo: Bélen Lobeto

While the bag may not be to everyone’s taste and certainly won’t appeal to those who prefer dogs, Belén Lobeto, a graphic designer living in Madrid was surprised to discover that her handbag choice proved so offensive.

As she walked home on Sunday night she was pulled to one side by policemen and given an on the spot fine for the fashion article.

Despite the fact that the bag carried an image of a cat and the phrase “All Cats Are Beautiful” beneath the letters ACAB, the police insisted it was an acronym for the punk phrase “All Cops Are Bastards”.

She was therefore fined under the controversial Citizens Security Law –  or Gag Law as it has been dubbed by its critics – for disrespecting the police.

The fine was issued on Sunday evening in a street near the Calderón stadium where there was a heavy police presence due to the Copa del Rey final between Barcelona and Sevilla.

“I was going quietly to my house when suddenly two officers ran up to me and asked for my ID and said they would issue a fine because I was carrying this bag,” Lobeto explained in a detailed Facebook post.

“I asked why and expressed doubt that my bag was attracting any attention much less causing a crime and told them they should take me in front of a judge to explain,” she continued.

The woman said she tried to make the police see reason but “changing their mind was impossible and if I didn’t shut my mouth I would have been taken away”.

“I asked them if there wasn’t more important things to worry about,” she added before ending her post with: “What a bloody disgusting country. But well, ALL CATS ARE BEAUTIFUL and anyone who says otherwise is lying.”

The woman also tweeted about the incident in a post that went viral and has been shared more than 13,000 times since it was posted at 6pm on Sunday.

“All Cops Are Bastards” and the acronym A.C.A.B. is an internationally recognised anti-police slogan dating to the 1970s and made famous by the 4-Skins British punk band.