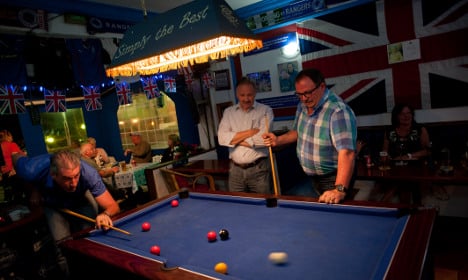 Among them is Pauline, a pensioner who moved to the southern Spanish coast in 2011 with her husband in search of warmer climes for her arthritis — one of up to one million Britons living in Spain, many eyeing a potential Brexit with trepidation.

“We'd go back,” says the slim, tanned, 69-year-old from the chilly northern British city of Leeds, sipping a pint of beer as she ponders the consequences of Britain leaving the European Union.

Like countless retired British nationals who have swapped the infamous rain back home for the sun of Spain and the lure of cheaper property, Pauline — who refused to give her last name — is most concerned about healthcare.

Apart from arthritis, she suffers from a thyroid condition for which she needs regular injections and other medication, all of which is covered by Spain's healthcare system under EU mechanisms that allow her to get the same treatment as locals.

What would happen if Britons voted to leave the European Union in a June 23th referendum is anyone's guess, as this would be unprecedented in the history of the 28-member bloc.

“One of the most important aspects of the withdrawal negotiations would be determining the acquired rights of the two million or so UK citizens living in other member states,” a British parliamentary committee concluded earlier this month.

Would Britain reach bilateral agreements with Spain — and the other remaining EU members — about expatriates' rights, and how long would that take?

Or would British pensioners be forced to resort to private healthcare or pay into Spain's social security system — a costly endeavour either way.

“We wouldn't be able to afford it… It's all right for the rich, but it won't be any good for the ordinary voters,” says Pauline, a former supermarket cashier.

It's the same story for Irene Davies, who lives 80 kilometres (50 miles) inland in a gated mobile home park where lovingly-tendered avenues lead on one side to a bowling green, and on the other to a red telephone box.

The 64-year-old has just finished breakfast at her local restaurant on the outskirts of the village of Mollina.

Nearby, mainly British locals stroll through a weekly market where After Eight mints and Oxo cubes vie for space with old copies of “Take a Break” magazine.

“There are concerns about health if we do come out of the EU, I think they'll find a mass exodus,” she says, pointing out that most of the residents in her mobile home park are roughly 60 to 80 years old.

“They're of a certain age, and they all take tablets.”

Officially, just over 283,000 Britons are registered as residing in Spain, but many don't bother to sign up and it is estimated 800,000 to a million live in the country.

Of all UK-born residents living in the EU in 2011, the largest number was in Spain, according to Britain's Migration Observatory — and many are retired.

But the uncertainty linked to a possible Brexit has more than pensioners on edge.

British lawyer Ralph Smith, who has worked in Madrid for 18 years and is married to a Spaniard, is equally baffled.

“Would I have to apply for a resident's permit to live here? Would I have to change my nationality?” the 52-year-old asks, pointing out that under Spanish law, that would mean giving up his British citizenship.

“Would I need to apply for a work permit?”

For Stephen Ritson, a presenter for Spain's English-speaking Talk Radio Europe, Britons here are “overwhelmingly” in favour of staying in the European Union.

Based on the Costa Blanca in southeastern Spain — another favourite for Brits with well-known resorts such as Benidorm — he says there are the odd exceptions, such as those worried about immigration in the United Kingdom.

“You get the slightly illogical 'all those foreigners going over there, we've got no control over the border' — and you think of the irony of them being foreigners in Spain,” he says.

By and large, though, Ritson says the main issue at stake is what deal will be negotiated for expats if Brexit happens.

“Will it be better than it is now, will it be the same or will it be worse?,” he says.

“Well I find it inconceivable that it could be better — I can't see why the rest of the EU would give Britain a better deal than it gives to its own members.”