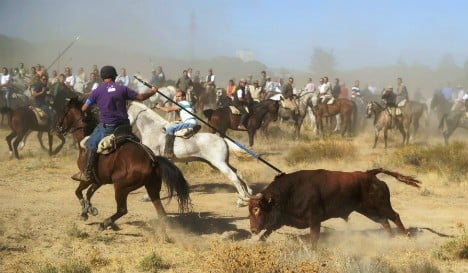 The decree targets the northern region's controversial Toro de la Vega bull run, which takes place every year in the town of Tordesillas and sees crowds on foot and horseback chase the animal, taking stabs at it with lances until they kill it.

Activists have for years tried to get authorities to ban the bloody medieval tradition, which predates the introduction of the classic bullfight at the end of the 17th century, and the Socialists have pledged to put an end to it if they are elected.

“The government has approved… a decree banning the death of bulls in public in popular and traditional taurine events,” authorities in Castilla y Leon said in a statement.

But the ban only affects events such as bull runs and not the more controversial bullfights, which government official Jose Antonio de Santiago-Juarez described as “art, emotion, beauty… and harmony.”

He said the region's conservative government had taken this decision to “accommodate the demands of current society.”

And while it prohibits the killing of the bull, the decree does not make any mention of the practice of taking stabs at the animal during the event, which activists say terrorise and injure it.

Silvia Barquero, head of animal rights party PACMA, said the issue now was to see exactly how the town hall of Tordesillas would implement the decree.

“Will it allow people to take stabs at the bull or not? This should not be allowed as it would lead to the death of the bull,” she told AFP.

She said that the decision was only a partial victory for animal rights activists that want the festival banned altogether.

“It's a first step, although not the last one.”

But Jose Antonio Gonzalez Poncela, Mayor of Tordesillas, told reporters that the town hall would appeal the decision, “based on the fact that it violates the law.”

Bullfighting and related events have come under increasing fire in Spain as aficionados of the tradition lock horns with animal rights activists.

Several city halls and regions have taken measures against the sport.

The Catalonia region in northeastern Spain banned corridas in 2012, for instance, and the city hall in A Coruna in the northwestern Galicia region dropped the “feria” — an annual festival with bullfights and bull running.