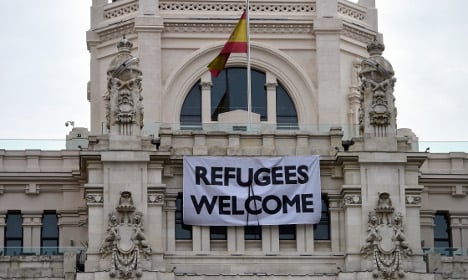 Amnesty released for the first time the Refugees Welcome Index on Thursday, measuring people’s willingness to have refugees live in their countries, towns, neighbourhoods or even their own homes.

The human rights organization surveyed 27,000 people across 27 countries on questions of whether refuge should be offered to those fleeing violence, whether their country should accept refugees or whether they themselves would take refugees into their own homes.

While Spain was ranked sixth place overall, Spaniards came out at number one for having the most people who personally wanted their country to take in refugees fleeing war or persecution.

“Spain has one of the most favourable positions towards hosting refugees and asylum-seekers of the countries surveyed,” the Amnesty International report for Spain stated.

But in stark contrast, Spain’s government has been quite slow to take in refugees, accepting roughly 20 people from overwhelmed Greece and Italy since it agreed to an EU shared responsibility plan that entailed sheltering some 15,000 asylum seekers in Spain alone.

In the Amnesty survey, Spain also had one of the highest percentages of people who said they agreed or strongly agreed that their government should do more to help people escaping conflict and persecution at 82 percent.

Critics have blamed the conservative government under acting Prime Minister Mariano Rajoy for dragging their feet on the matter.

“While 61 percent of Spanish respondents [strongly] believe the government should do something more for refugees and asylum seekers… the authorities in Spain continue to maintain ridiculous figures for resettlement and relocation,” the report stated.

A number of regional governments last year set up a network for people to register to voluntarily take refugees into their own homes, including in Barcelona and Madrid.

Over one in six Spanish respondents (18 percent) to the Amnesty survey said they would indeed bring refugees into their homes for shelter, which put Spain at fourth place in this category behind just China (46 percent), the UK (29 percent) and Greece (20 percent).

The country to come out on top for overall most welcoming in the survey was China, followed by Germany, the UK, Canada and Australia.

Just under half of the respondents in China said they would take refugees into their own homes at 46 percent.

The countries ranked lowest for acceptance were Kenya, Poland, Thailand, Indonesia, and Russia at the very bottom.

Still, overall 80 percent of those polled around the world said they would “welcome refugees with open arms”.

“These figures speak for themselves,” said Amnesty International Secretary General Salil Shetty in a statement.

“People are ready to make refugees welcome, but governments’ inhumane responses to the refugee crisis are badly out of touch with the views of their own citizens.”