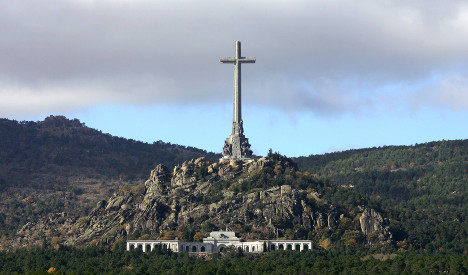 The Valley of the Fallen, where Francisco Franco is buried. Photo: Philippe Desmazes / AFP.

The Association for the Recovery of Historical Memory (ARMH) wrote a letter to acting Prime Minister Mariano Rajoy on Tuesday offer up their services to the Spanish government to dig up and remove the remains of the late dictator Francisco Franco from his burial place at the Valley of the Fallen (Valle de los Caídos).

The site, near Madrid, was originally commissioned by Franco as a memorial to those who died fighting in the Spanish Civil War that ultimately brought about the general’s repressive rule.

Franco was later buried there in 1975 and it has since remained a controversial memorial where some lingering supporters still gather to honour the totalitarian leader.

The group ARMH argues that Franco should now be dug up and placed elsewhere so that taxpayers do not have to continue to fund the maintenance of his tomb at the site.

“We believe that the State is subjecting the dictatorship’s victims to a form of mistreatment and humiliation by obligating them to pay through their taxes for dictator Francisco Franco’s tomb, which is sustained through public funds,” ARMH wrote in a statement to The Local.

Franco’s four decade-long regime was characterized by concentration camps, forced labour and executions, mainly against those who opposed him ideologically and politically.

A number of those who were forced to work on the construction of the Valley of the Fallen memorial were political prisoners under Franco.

“It is an insult that the victims of the most horrible crimes that can be committed against a person – those of forced disappearances – are made to finance with their taxes a mausoleum that hides the history of the slaves who were forced to construct it and which was used to glorify those responsible for the violent disappearance of 114,226 civilians,” the advocacy group stated.

ARMH has worked over the past decade to collect testimonies of Franco’s victims and to identify those dumped in mass graves.

The group cited calls by international organizations like the United Nations for Spain to investigate what happened to the thousands who went missing during Franco’s time, as well as other crimes which were pardoned in 1977 as a way to make peace following Franco’s death.

ARMH said it offers its “resources and extensive experience to the Government” to now remove Franco from his current grave and transfer him somewhere else determined by his family – a place not to be funded by public money.

A prominent lawyer last year also launched a petition to have the military leader removed from the memorial site.

Spain has struggled with the legacy of Franco’s reign over the past four decades, with victim advocacy groups pushing to further investigate crimes and remove symbols of the dictatorship, including statues that still remain and changing the names of town or street names.

Last week, a court authorized for the first time the exhumation of bodies from the Valley of the Fallen.

The two bodies to be exhumed are those of rebels killed by Francoist forces, who were buried at the site without their families’ permission. Their descendants now wish to give them a proper burial.