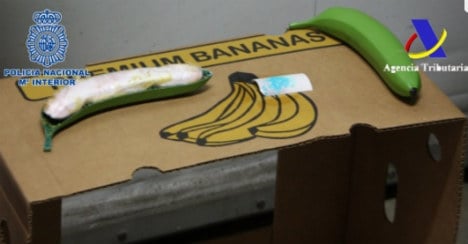 A container filled with 19 boxes of plastic bananas stuffed with cocaine was detected last month after a long investigation into criminal gangs involved in smuggling drugs into Europe from South America.

The smuggled drugs amounted to 171 kgs with an estimated street value of around €17 million ($19 million).

“During a check of a consignment in Port of Algeciras on April 28th, a pallet marked with a red 'X' was discovered by agents,” said a statement from Spain’s National Police.

“It contained 19 boxes each holding 88 plastic bananas that looked like the real thing. Inside the false bananas was a total of 171 kgs of cocaine.”

The shipment was imported from the Colombian town of Turbo and was destined for a fruit packing company in Huelva.

It is the latest in a string of ingenious attempts to smuggle drugs into Spain that have been detected by Spanish authorities. In April, a shipment of furniture was discovered to be made entirely of cocaine paste.

Spanish authorities seized over 22 tonnes of cocaine in 2015, a 43 percent increase on the previous year.