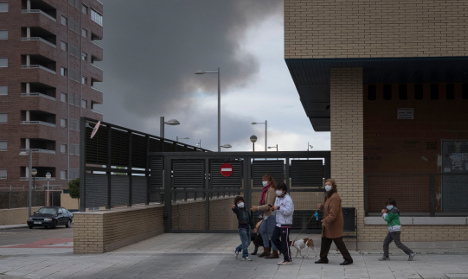 Some 10,000 people living in the town of Sesena near the Spanish capital evacuated their homes on Friday. Photo: AFP

It could take another 10 days to put out a huge fire at a tyre dump near Madrid, regional authorities said on Monday, though residents have already been allowed to return to the area.

Some 10,000 people living in the town of Sesena near the Spanish capital evacuated their homes Friday after the dump went up in flames after a suspected arson attack.

The regional Castilla-La Mancha authorities in a statement estimated that “when the fire is completely extinguished (between a week and ten days) there will still be 30,000 tonnes of tyres able to be recycled and reused”.

Spanish authorities allowed residents near a giant tyre dump blaze to return home on Saturday, saying that the risk from toxic fumes billowing from the rubber heap had reduced although the fire had yet to be extinguished.

The news came as it emerged that the European Commission had contacted Madrid over the illegal dump, the first step in a procedure which it can launch when it suspects a member state of infringing EU law.

Some 10,000 people living in the town of Sesena near the Spanish capital evacuated their homes Friday after the dump went up in flames in a suspected arson attack.

A massive black cloud of fumes billowed into the air, prompting widespread health concerns as the government of Castilla-La Mancha where the dump is located warned the smoke was “toxic.”

But the regional government said Saturday it had lifted its evacuation order “as a result of the reduced risk for residents in the area” as firefighters brought the blaze under control.

The cloud had also reduced in intensity and was rising up higher in the sky, avoiding residential areas, authorities added.

The blaze broke out before dawn on Friday in the dump that stretches over 10 hectares (25 acres) – the equivalent of about 10 rugby fields – and straddles the Castilla-La Mancha and Madrid regions.

The massive stack of tyres started to form in the 1990s when a company began using the site as a temporary depot for old tyres due to be recycled, and it grew from then on.

It was declared illegal and environmental groups had long warned that it posed a health hazard, but authorities only recently started acting on the problem, inviting bids to empty the dump and destroy the tyres at the end of last year.

“There were contacts and requests of information by the Commission to the Spanish authorities on landfills, including the one in Sesena,” Commission spokesman Christian Wigand told AFP.

A request for information is the first step towards an infringement process, which if officially launched can lead to EU court proceedings.

Under a EU directive, used tyres cannot be dumped in landfills.

Tyre dump blazes are notoriously difficult to extinguish and have been known to last for months and even years, as tyres often continue to burn inside even if they are extinguished from the outside. They also reignite easily.

But Francisco Martinez Arroyo, environmental minister for the Castilla-La Mancha government, told Spanish radio the fire would likely be extinguished in “two or three days.”

“The fire has been mastered and we are concentrating on the air quality,” Arroyo said, stressing that the blaze was probably the result of arson.

In a bid to alleviate health concerns, Madrid's emergency services tweeted that air quality measuring stations in the area continued to give normal readings.

But environmental group Ecologists in Action warned that the stations were not set up to measure all the pollutants being released from the mass burning of tyres — an atypical event.

These include polycyclic aromatic hydrocarbons (PAHs), compounds considered dangerous and in some cases cancer-causing.

In a statement, the group called on “authorities involved to immediately measure the pollutants that the fire… is emitting in huge quantities, to protect people's health.”

The European Commission has requested information from the Spanish authorities on landfills and dumping sites.