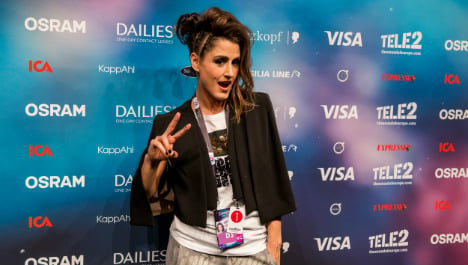 The Eurovision Song Contest 2016 is already underway in Stockholm, with the second semi-final taking place on Thursday.

One act who has a guaranteed place in Saturday’s final is Barei from Spain, with her song Say Yay! So who is Barei and could she bring the coveted Eurovision trophy home to Spain this weekend? Barei is the stage name of Bárbara Reyzábal González-Aller, aged 34, from Madrid. Barei is still much of an unknown in Spain, despite having released one album in 2011 and her latest in 2015. She has written songs for Spanish acts including Edurne (last year's Eurovision entry) and co-wrote this year’s song, Say Yay!

Is the song any good?

Say Yay! might not be incredible lyrically but it does make history by being the first Spanish Eurovision entry sung completely in English – which could be a blessing or a curse for Spain. On the one hand, it will be easier for people around Europe to understand the lyrics but on the other, they will realize Barei is belting out lines like: “I feel alive/My whole life/I’m still alive/From broken mirrors” – er what?!

The song has not been without its share of controversy, with Spanish academics slamming the idea of entering an English-language song. The director of the Royal Spanish Academy (RAE) – the official institution tasked with overseeing the Spanish language – classed the choice of an English-language song for Spain's Eurovision entry as “inferior and idiotic”.

Barei doesn’t have to worry about making it through the semi-finals – as one of the ‘Big Five’ Spain’s entries are guaranteed a place in the final. That, however, doesn’t mean Spain is a favourite, far from it – it is currently 16th favourite to win on Saturday night.

Judging from the rehearsals, Barei will be sporting a gold sequined vest-dress and trainers – a “funky look” that is quite brave considering most of the female contestants go full-on diva glam on the night.

Russia is the country to beat this year with its entrant, Sergey Lazarev and his song 'You are the only one' currently the 6/4 favourite. France is next at 7/2 followed by Ukraine and Australia. Spain will have to pull something incredible out of the bag to be in with a chance of winning…