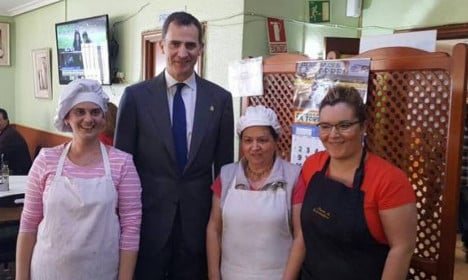 Staff at the Puerta de Extremadura restaurant in central Spain received a surprise visitor on Monday when the king turned up for lunch.

The two men chose from an €11 set menu – a midday staple at many Spanish restaurants – which included options such as rabbit with potatoes, beef tongue and steak. They then allowed themselves to be photographed by staff and other guests with some of those pictures appearing on the restaurant's Facebook page.

It is not known whether the king left a tip.

While the king’s choice of dining establishment may surprise some, it is line with the policies of a monarch who came to power stressing the importance of financial transparency.

King Felipe VI took over from father Juan Carlos, who abdicated in 2014, amid a series of scandals that had seen the popularity of the Spanish royal family plummet.

Those scandals included King Juan Carlos’s controversial elephant hunting trip in Botswana and the ongoing fraud case in which his daughter Princess Cristina and her husband Iñaki Urdangarin are involved.

Hoping to turn things around for the embattled institution, King Felipe announced new measures including external auditing of the royal accounts

The budget for Spain’s royal family in 2016 came in at €7.86 million, a figure which has remained unchanged for three years and which is well down on the 2011 sum of €8.43 million.

It also means Spain is home to Europe’s cheapest monarchy with 2012 estimates suggesting the Dutch royals lead the way with an annual €40 million cost for their taxpayers.