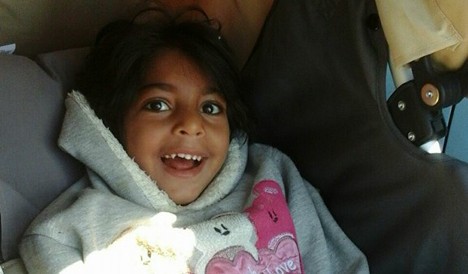 Osman landed at Madrid’s Adolfo Suárez airport on Monday with his family. He was immediately taken by ambulance from Madrid to Valencia, where he was to receive specialist treatment.

His family were “nervous” and “hopeful” according to workers from the NGO Bomberos en Acción, which helped convince the Spanish government to bring Osman to Spain after collecting over 150,000 signatures in an online petition.

“They want to thank all the Spaniards who have done this for them,” said Javier Bodego, coordinator of the organization’s refugee project.

Osman suffers from the movement disorder cerebral palsy and was living in the crowded camps of Idomeni, Greece at the closed Macedonian border where thousands of refugees are stranded, hoping to proceed on what was a main migration path through Europe.

“The number of people who showed their interest in Osman is good news because it shows that our country is in solidarity, and believes this is worthwhile,” José Manuel García-Margallo, Spain’s Foreign Minister said last week.

Osman along with his parents and two siblings, ages nine and eight, fled Afghanistan in March and “after a harrowing journey on land and sea,” arrived at the Greek camp, according to Firefighters in Action.

Osman suffers from recurring seizures, spasticity (tightness of the muscles), respiratory problems and malnutrition, according to the firefighter group.

“In one month, he lost four kilos (now weighing eight kilos at 90cm tall,” the group wrote in the petition, adding that he is only eating small amounts of cereal and milk so as not to risk choking.