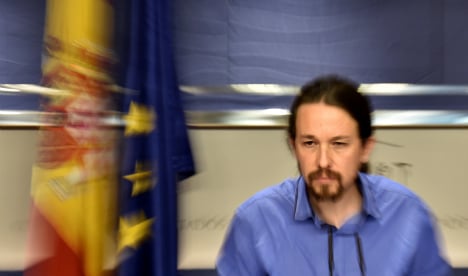 Pablo Iglesias has teamed up to form a far-left alliance. Photo: AFP

The preliminary agreement to stand together in the repeat polls was announced by both groups late on Monday and it will be put to party members for a referendum for final approval later this week.

The details of the deal still must be ironed out but Podemos, which was founded in 2014 and is close to Greece's ruling Syriza party, and Izquierda Unida (IU), a communist-green party, called the agreement “historic”.

“We have agreed on what is essential: we will run together in the elections to win them, and I suspect our members and those of IU will react to this historic opportunity with enthusiasm,” Podemos leader Pablo Iglesias said on Tuesday in a radio interview.

Watch the video of the two leaders announcing the alliance:

Based on the results of an inconclusive December 20th general election, an alliance between the two parties could relegate the Socialists, which has long been the voice of Spain's left, to third place.

Podemos and its allies came in third place with 5.18 million votes while IU headed by telegenic 30-year-old Alberto Garzon got over 900,000 votes.

But all polls carried out since the elections have pointed to a fall in support for Podemos and a rise in IU voters.

December's vote put an end to Spain's traditional two-party system as voters fed up with austerity and corruption scandals flocked to new groups, resulting in a hung parliament.

The four parties were unable to agree on a governing coalition, leading King Felipe to call fresh elections, Spain's first repeat poll since the country returned to democracy following the death of dictator Francisco Franco in 1975.