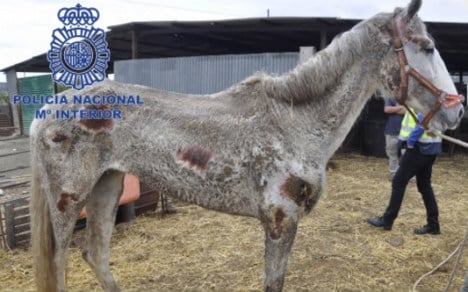 n investigation was launched following complaints from an animal charity over the neglected state of the horses at the finca.

When police moved in they discovered 22 horses were being kept in terrible conditions, suffering malnutrition, neglect and inhumane conditions, said a statement from the National Police.

One pony had to be immediately put down because it was in so much pain from an untreated injury to its leg, while two mares were found to be in a critical condition, one covered in open sores, while the other had a bleeding wound to its leg.

The horses had been confined within an enclosure that was “strewn with debris, including rolls of barbed wire and metal sheeting and rusty machinery,” according to the statement.

Officers also discovered four dogs on the property which were in such a state of starvation that one had lost its teeth and struggled to walk.

All the animals received emergency medical treatment before being taken to animal rescue centres.

The two arrested were the 44 year-old owner of the property and a 75 year-old man.

Two dogs from the same property were rescued by an animal charity in January. One of them, Bobby has suffered a terrible neck wound after being chained for 24 hours a day and needed 30 stitches. He was also covered in parasites.

The other, a labrador cross named Negro, had his cuts off and a broken leg and infected sores.