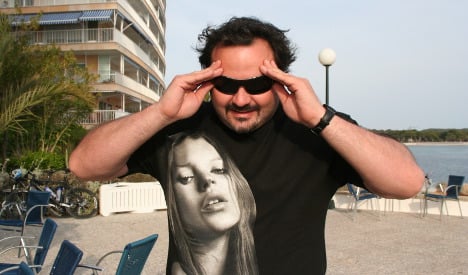 “While she accepted at first, she subsequently refused. Still she was forced… to film such scenes after consuming drugs,” it said.

Press reports named the director as Ignacio Allende Fernandez, or Torbe as he is known, adding that he been remanded in custody pending further police inquiries.

He faces allegations of sexual abuse of children, dissemination of child pornography and human trafficking.

Police also announced the arrest in April of a Ukrainian man “linked to an international network that brought Ukrainian women (to Spain) to filmpornographic scenes, often against their will”.

“They lured girls who had financial problems at home, gave them the necessary documents to enter Spain and once they were here they would … lock them up, often in the office where the recordings took place,” the statement said.

“Many of them had no knowledge of what they would do or of the harshness of the practices they would be subjected to.”

After the director's arrest, investigators found on the main server of one of his companies “several pornographic videos featuring protagonists who were minors”, police said.

Torbe has frequently appeared in lengthy interviews with Spanish media, boasting about having contributed to “professionalising amateur pornography”.

In an interview with El Confidencial online daily in 2014, he said he had struggled when he began his career to find women who were willing to work with him.

“Now, they are the ones who come to me,” he said, describing the financial crisis that struck Spain in 2008 as “an opportunity” for his business that allowed him to “cut costs”.

While the worst of the crisis is over, unemployment in Spain still soars at a rate of over 20 percent. And among young people, the jobless rate stands at 45 percent.

Spanish police in October launched a big operation against child pornography, arresting 81 men across the country who were suspected of having exchanged sexual photos and videos of minors over the Internet.

The child pornography investigation began with “cyber-patrols” on the Internet by specialised agents, who after about a year were able to identify dozens of suspects.