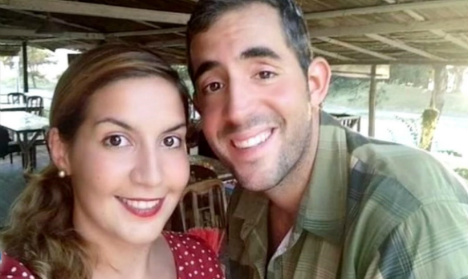 Mohamad Zubil Mat Som, a senior coast guard official, told AFP that Malaysian fishermen over the weekend recovered an engine entangled in their net that was from the missing vessel.

The small boat is “believed” to have sunk and divers have been deployed in the area where the boat engine was found, he said.

“We will seek the assistance of the local fishermen to drag a large net across the ocean floor,” the coast guard said in a statement.

The foreigners went missing along with a Malaysian off the coast of Sabah state on Borneo island during bad weather last week.

The Malaysian was identified only by one name, Ella.

Officials have not given any indication if kidnapping could have been involved.

Islamic militants from the Abu Sayyaf group have been blamed for repeated kidnappings off Sabah.

Among the recent incidents, 10 Indonesian sailors were snatched from their tugboat in late March. They were released on May 1st

In March, however, Abu Sayyaf militants beheaded Canadian tourist John
Ridsdel, for whom they had demanded $21 million in ransom.