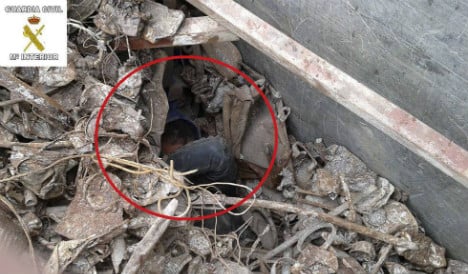 The minors, all of North African origin and without papers, were discovered on Thursday evening in the port of Melilla, one of Spain´s two North African enclaves, along with Ceuta.

Agents also discovered another 58 minors, also from North Africa, who were trying to stow away on vessels in the port.

The stowaways were discovered at 11.25pm on Thursday, buried in a tub of scrap metal on a boat heading to Spain (see video above).

Civil Guard agents used a heartbeat detector to locate the minors, who ran the risk of considerable danger owing to “the weight of the scrap metal, its instability, sharp edges and the time the boat would have been docked in the port”, Civil Guard sources confirmed to El País.

Despite the danger from the heavy, sharp metal, none of the minors needed medical attention. They were all transferred to Melilla´s social services.

Melilla and Ceuta are a popular route into mainland Spain for immigrants from North and West Africa. There have been several instances of people storming the fence that separates Melila from Morocco in an attempt to access the enclave.