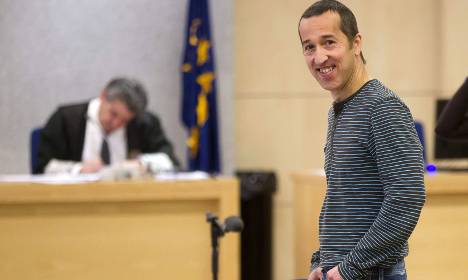 Gogeaskoetxea’s lawyers had fought against his extradition to Spain. Photo: AFP

Eneko Gogeaskoetxea Arronategui and another Eta member had planned to lob grenades at Juan Carlos during the inauguration in northern Spain, according to the national court.

But police stumbled upon the plot as the two men, dressed as gardeners, were attempting to hide the weapons in flowerpots outside the museum five days before its scheduled opening on October 18th.

Gogeaskoetxea shot dead a police officer at close range in an ensuing firefight and managed to escape, the court added.

Gogeaskoetxea, 49, was arrested in Cambridge, England in July 2011 where he had been living for several years under a false identity – after a fellow Spaniard recognised him at a squash club.

He was sentenced to 30 years in jail for murdering a police officer and another 15 years for conspiring against the monarchy. He was handed down a further 47 years behind bars for several other crimes related to the plot, including forgery of public documents and possessing weapons.

Under Spanish law, a convicted criminal can serve a maximum sentence of 40 years in prison, unless he is convicted of carrying out deadly terrorist attacks in which case a life sentence is possible

Gogeaskoetxea’s lawyers had fought against his extradition to Spain, arguing that he faced a real risk of “a flagrant denial of justice” in the country because the accusations against him were based on the confessions of a co-defendant who was allegedly denied proper access to a lawyer.

Britain’s high court rejected the appeal in 2012 and he was extradited.

Eta has been blamed for more than 800 killings in its campaign of bombings and shootings to create an independent Basque territory in north Spain and south-west France. The group’s last deadly attack in Spain was in August 2009.

Eta has been linked to several other assassination plots on Juan Carlos, 78, who abdicated the throne to his son Felipe in 2014.