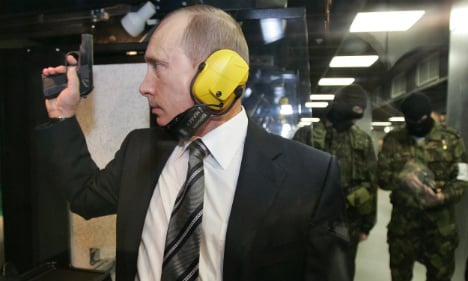 Arrest warrents have been issued for those close to Putin. Photo: AFP

Vladislav Reznik, a lawmaker from President Vladimir Putin's United Russia party and deputy head of the parliament's lower house finance committee, his wife Diana Gindin, and Nikolai Aulov, deputy director of the country's anti-drugs agency, are among those wanted.

Igor Sobolevsky, former deputy director of the Investigative Committee of Russia – often described as the equivalent of the FBI  – is also on the list.

In the court order seen by AFP, the judge outlined their alleged links to Gennadios Petrov, who was said to head up Russia's notorious Tambov gang from his luxury villa on the Spanish island of Mallorca.

Petrov was arrested at his Spanish villa in 2008, and is suspected of having laundered tens of millions of euros earned through the criminal activities of his gang, which engaged in drug and arms trafficking, robbery and kidnappings.

He is now on the run after having been released on bail.

Petrov had “close links with Russia's economic, political, judicial and police authorities, as well as with people evolving in international organised crime, to see through common projects,” the court order said.

It alleges that Petrov and his wife created a network of companies to re-invest his gains in areas like the property sector.

Reznik, meanwhile, is alleged to be involved with Petrov.

“Reznik carries out whatever legal or illegal activities are necessary – influence peddling, privileged information – at the highest levels in Russia for Petrov's interests,” the court order said.

It alleged that Aulov also has close links with the mafia boss, to whom he passes on information.

The judge has already ordered six of the 15 people investigated in the wide-ranging probe to be tried, including Petrov, his wife and Reznik.