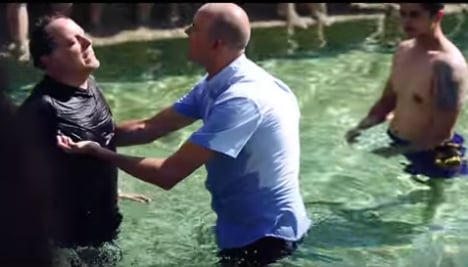 One of the group's baptisms. Screen grab: The Last Reformation/YouTube

A religious group is staging several “spirituality seminars” this weekend in Barcelona, claiming that its members – through Jesus – can heal people with a variety of conditions, including autism.

The Last Reformation, an evangelical Christian group founded in Denmark by Torben Sondergaard, arrived in Spain on Friday for a series of “spirituality seminars”.

The group has already seen protests staged against it ahead of seminars planned for Dublin, Ireland, where autism campaigners have denounced the group’s members for claiming that they have “driven out the demons” of those with autism.


Sondergaard carrying out a baptism. Screen grab: The Last Reformation/YouTube

Speaking to The Local on Friday, Sondergaard described when he drove out the demons of an autistic child.

“It happened in Australia to a nine-year-girl who suffered autism. She was freed from demons and she was happy. It wasn’t something shocking like a big man holding her down.

“She was with her mother and we all prayed and the demon was cast out and she was happy and the mother was happy.”

“It’s not that we tell people that we can cure autism, it’s not like that. Just as Jesus could cast our demons and cure people so can we all through prayer, we are just teaching people how to pray so that they too can help the sick,” he said.

“We are not a church or a cult, we are a religious movement. We teach people how to be true disciples. We have moved away from the Church with their system of priests and Sunday services and want Christ to be a part of everyday life.”

But for autism campaigners including Fiona O’Leary, of the group Autistic Rights Together (ART) who herself has two autistic children, the group’s claims are damaging.

“The Last Reformation are really dangerous,” she told The Local on Friday. “They are terrifying vulnerable people and autistic children by telling them they are possessed with demons.

“They believe they can free the demons from your body by administering baptism. They refer to it as being “delivered” or “set free”.

“They seem to target vulnerable people; many people with serious conditions are being targeted by The Last Reformation,” she added.

“Autism is a neurodevelopmental condition that cannot be cured but sometimes parents are not receiving the proper support they need and they can be taken in by groups like The Last Reformation.”

“They also claim they can “cure” gay people, it is truly horrendous what this group are doing,” said O’Leary.

The group will be going out onto the streets of Barcelona this weekend to practice “kickstarting”; performing 'miracles' and healing the sick on the streets, according to its seminar programme.

“The teachings will be very practical and will include going out on the streets healing the sick and preaching the gospel under the supervision of team members from The Last Reformation,” according to the seminar guide, published online.

Sandergaard said that the three day event in Barcelona was open to everyone.

“It is a three day course to teach people how to heal, how to pray and how to cast demons out. Demons are with us as much as they were two thousand years ago when Jesus walked among us.”

“Spaniards should be very wary of The Last Reformation and I strongly advise people against attending these dangerous workshops,” she told The Local.

“The Last Reformation are touring the world with their brainwashing scam and I am told that there are already 400 people attending at their workshop in Spain.

“The Church needs to address this issue also as these cults are abusing and lying to vulnerable people in the name of God.”

The group is particularly proud of the miracles performed by its members, promoting them across its social media, on Facebook and YouTube.

One video shows a member of The Last Reformation laying his hands on a woman with crutches, who immediately discards them and walks unaided.

Asked how many people he had cured he said: “I don’t keep a count. A few years ago we went on Danish television and through prayer we cured thousands of people just through the screen.”