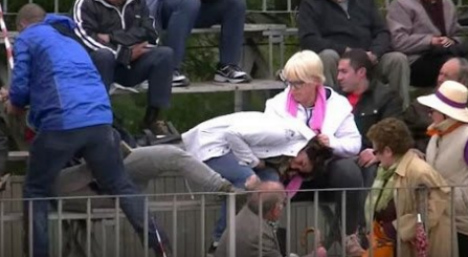 The two woman were attacked on Friday. Screen grab: AnimaNaturalis

Four people have been arrested for attacking two animal rights activists who were protesting a bull festival in the town of Mas de Barberans in Catalonia, northeastern Spain.

Aïda Gascón, the head of the animal rights organization, AnimaNaturalis, in Spain, and her colleague, Yasmina Moreno, were protesting a correbou, or bull festival, during which fireworks are tied to the bull’s horns and it is made to run through the streets of the town, when they were attacked.

The two women were filming to make sure that it did not breach regulations for bull events in the region, which does permit some bull events but where bullfighting is banned.

But fans of the bull running set upon the two women on Friday, punching them and pulling their hair as the crowd applauded.

AnimaNaturalis released the video of the incident on Monday, denouncing the “savage attack” in which the women received cuts and bruises and their cameras were broken.

“This is the culture and the essence of bullfighting: people applauding violence,” Gascón tweeted after the incident, which she and Moreno reported to police.

Three men and a woman – between the ages of 19 and 47 – have been arrested for the attack. They are all members of the same family, according to Catalan police sources.

The incident was filmed by members of Catalonia’s police force, the Mossos d’Esquadra, whose video helped to find the four attackers.

“We have been going to these festivals for the past five years, to check that they are complying with the bull event regulations, and we have never suffered this kind of violence firsthand,” Gascón said.

“We want this to stop now, but we will not stop documenting the bull runs,” she added.