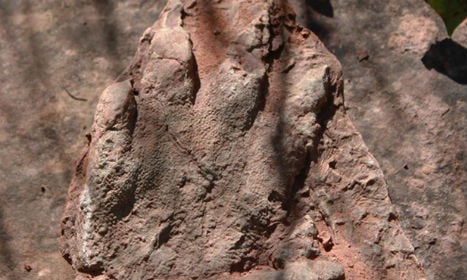 It is believed to be a footprint of an Isochirotherium, a reptile-like ancestor of dinosaurs and crocodiles that roamed the earth 240 million years ago, said Catalonia’s Department of Culture in a statement announcing the find on Monday.

The print was discovered in early April by a person out walking in Olesa de Montserrat, 40 kilometers north of Barcelona.

A plaster cast of the print was made by the town's council and handed over to the region's archaeology and paleontology department “so it can be studied and preserved”.

Eudald Mujal, a paleontologist at Barcelona’s Autonomous University (UAB) who is studying the find, said the fossil was very important because it was “exceptionally well preserved”.

“This fossil footprint (ichnite), of the Middle Triassic period, about 240 million years old (Ma), belongs to an archosaur, the group of animals that evolved to dinosaur and crocodiles,” he told The Local.

“Archosaurs were similar to crocodiles, of quadrupedal gait, but with longer limbs (both legs and arms) and more erect posture (i.e. no contact of the body trunk and tail on the ground) than crocodiles.

“This footprint is very important because it's exceptionally well-preserved: skin impressions (like reptile scales) are well visible, as well as claw impressions. On a preliminary analysis, this footprint is classified as the ichnogenus Isochirotherium. It'll help us to better understand the shape of the footprint productor, as well as the environment where it live (by geological analyses),” Mujal added.

“Moreover, this is the third fossil site of this age discovered in the Iberian Peninsula, the other two are in nearby localities of Catalonia. In sum, the footprint (and further findings) will help us to know which animals lived before the rising of dinosaurs, and how was this part of the earth during the Middle Triassic.”