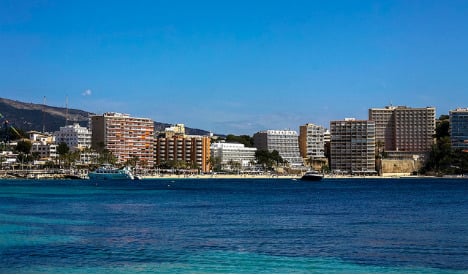 The tragedy happened in the popular resort of Palmanova Photo: Antoskabar / Flickr

Samantha Johnson, 24, was discovered by hotel staff in the bathtub with the tap still running after they were alerted to water seeping out under her hotel room door.

Emergency services were called at shortly before 11pm on Monday night but paramedics were unable to resuscitate her and she was pronounced dead at the scene.

A post-mortem on Tuesday morning confirmed that she died from drowning.

“The forensic department carried out an autopsy on Tuesday morning and has determined that it was an accidental death through drowning. She had a lot of alcohol in her system and may have fallen asleep while taking a bath,” a spokesman at the Guardia Civil in Palmanova told The Local.

“It appears that she had quite a few drinks and on returning to the hotel decided to take a bath. Hotel staff were alerted when water appeared under the door and when no-one answered they entered the room to find the woman in the bath with the tap still running.

“The hypothesis is that she passed out and then drowned,” the officer, who confirmed the victim's name, said from Mallorca.

The receptionist at the TRH Torrenova hotel in Palmanova, Magaluf told The Local that Johnson had been staying at the hotel with her partner but the pair had had a furious row the night before and he had walked out on her.

“The woman came to reception very upset on Sunday night and asked us to call the police because her partner was being very aggressive, then shortly after he asked for a cab and went to the airport,” the receptionist told The Local.

“She stayed on another night without him and then was discovered on Monday evening.”

“We are providing support to the family of a British national following their death in Mallorca, Spain, on 2 May 2016,” a British Embassy spokesman told The Local. “We are in close contact with local authorities.”