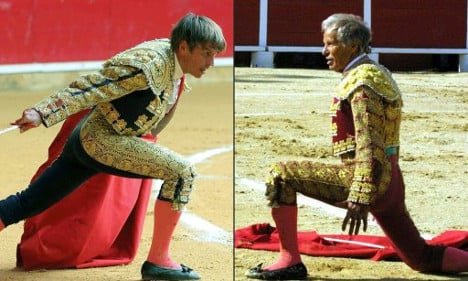 Both bullfighters are known as El Cordobes. Photo: AFP

Benitez, 79, who revolutionised Spain's conservative bullfighting world in the 1960s with his acrobatic style, has long denied that popular matador Manuel Diaz, 47, who also uses the nickname “El Cordobes”, is related to him.

But a court in the southern city of Cordoba agreed to hear the paternity case after Diaz presented the results of DNA tests carried out on a restaurant napkin used by Benitez that was picked up by a private detective.

The court then ordered an official DNA paternity test to be carried out and the results, presented in court on Thursday, show there is a 99.9 percent probability that Benitez is the father of “Cordobes Jr.”, Diaz's lawyer Fernando Osuna told AFP.

“When the DNA result is of this percentage, there is nothing more to discuss,” said Osuna.

The court is expected to give its ruling next week. Benitez did not appear at Thursday's hearing.

The case has gripped Spain, with the two men featuring regularly in the country's gossip magazines.

The scandal broke in February when Diaz told “Hola!” magazine he had filed a paternity suit against Benitez after trying in vain to form a relationship with him.

“The straw that broke the camel's back was the day when he was asked about me during a television interview. Benitez turned away from the camera as if I were the devil. My children asked me, 'Why doesn't your father want to talk about you?'” Diaz told the celebrity magazine.

Diaz says he does not want to make any claims on Benitez's estate and just wants to claim a lineage that he is proud of.

Benitez has five other children and reportedly met Diaz's mother when she was working as a maid in Madrid.

His rise from an illiterate youth who was caught by police stealing chickens to top matador was narrated in the 1967 best-selling book “Or I'll Dress You in Mourning: The Extraordinary Story of El Cordobes”.